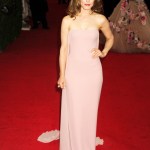 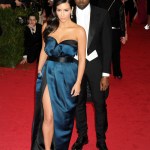 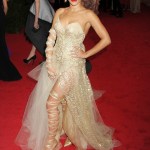 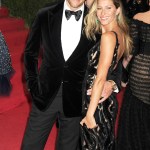 In ‘Downton Abbey’ you aren’t allowed at the dinner table without your tails — and it looks like the same will go for the 2014 Met Gala! We can’t wait to see the famous men in attendance, (like Kanye!), suit up and adhere to the dress code — can you?

While last year to fete the opening of the “PUNK:Chaos to Couture,” exhibit a slew of the looks on the red carpet were better suited for a rock concert, this year it’s about a return to formality — and it isn’t just the ladies that will have to make sure their outfit is appropriate and fits the “Charles James: Beyond Fashion,” theme of the 2014 Costume Institute gala at the Metropolitan Museum of Art on May 5 in NYC. In fact, the men need to follow along with the dress code, too! Vogue‘s editrix, Anna Wintour, called for the dapper dudes in attendance to be outfitted in “white tie and decorations,” reports WWD — and that goes for every male in attendance, to the celebs and the designers to polite dates.

Dressing in “white-tie” is rather traditional, although the definition of what it entails could vary slightly — especially depending on where you’re located! To break it down, it usually consists of a black tailcoat with matching trousers that feature a single stripe of satin, (if you’re across the pond in Europe or the UK, that would be two stripes), a white piqué wing-collared shirt, a white vest, studs and cuff links, a white bow tie, white or grey gloves, black patent shoes, and black dress socks. (Don’t worry though, the top hat is just optional).

Forget breaking out your favorite tuxedo — now you’ll have to make sure you have a white-tie ensemble that’s ready to go for the big day! The men have already been hard at work making sure they have their suit ready to go. In fact, NY Knick Amar’e Stoudemire tapped Lanvin to design a white-tie look for his 6’11” frame — and he isn’t the only one who consulted a fashion house for his outfit!

So, what can a bespoke creation cost you? According to WWD, these outfits can set you back anywhere from $5,000-$10,000 — but really, it doesn’t end there. Now factor that on top of the $25,000 ticket for the fundraiser and it’s clearly an insanely pricey evening!

This year the theme celebrates the “Great American Couturier,” Charles James. The designer was very popular from the ’30s and even into the ’70s, while his population definitely surged in the ’40s and ’50s, as he crafted beautiful, bespoke creations for the fashion icons of the time. From detailed draping to voluminous ball gowns and exquisite structuring, everything was about grand glamour.

Usually the men just have to throw on a suit and go, but we’re excited to see what the red carpet looks like this year now that they have to step up their style game.