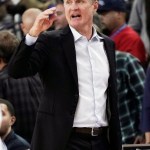 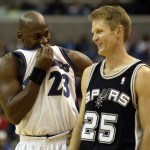 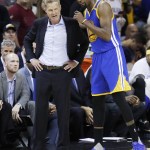 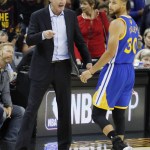 Steve Kerr is set to be featured in the 10-part documentary ‘The Last Dance’, which goes behind-the-scenes of the Chicago Bulls’ 1997-98 season, on Apr. 19. Here are five things you should know about him.

If there’s one thing Steve Kerr, 54, knows how to do, it’s how to win NBA Championships and fans are about to see him up close and personal alongside Michael Jordan, 57, and the rest of the Chicago Bulls team in the 1997-98 season in the new documentary The Last Dance, which premieres on Apr. 19. With a ton of achievements under his belt as an NBA coach, including leading the Golden State Warriors to their first NBA Finals victory in 40 years, Steve, who was a reserve on the Chicago Bulls at the time the documentary was filmed, is sure to be an interesting and memorable force in the special 10-part series. Before diving in to watch the new doc, here are five things you should know about Steve and his longtime career in the NBA.

1. He was a championship-level player. Steve helped lead the Golden State Warriors to an incredible NBA Championship win in the 2014-15 season, but he had a handful of Championship rings before he joined the Dubs, per ESPN. Steve won three championships with the Michael era Chicago Bulls before joining the San Antonio Spurs to win in 1999 and 2003.

2. He claims during filming of The Last Dance, it ‘felt like the last season’ which is what makes the tension in the film so interesting. “It definitely felt like the last season. It wasn’t something that was concocted by (Head Coach) Phil Jackson when he called it the last dance. It was real,” he told ESPN. “Everybody’s contracts were up, basically had an entire team full of free agents, and it just felt like that was going to be it. And so we wanted to make the most of the moment.

3. Steve’s basketball legacy started in tragedy. While Steve was attending University of Arizona, he was given horrific news on the morning of January 18, 1984. His father, Malcolm Kerr, (who had been serving as president of American University of Beirut in Beirut) had been murdered by members of Islamic Jihad. After mourning his beloved father, Steve used this personal tragedy as motivation. “We called him Ice,” Brock Brunkhorst, a University of Arizona teammate, told USA Today. “Because that’s just how he was.” When facing their rivals, Arizona State, in 1988, fans chanted derogatory comments against Steve. He responded by hitting six 3-pointers in the first half, leading the team to a blowout victory.

4. He broke his own record during the 2015-16 season. One of the biggest stories for the NBA season was if the Warriors could break the 72-10 win record set by the 1995-96 Bulls. One member of that historic team was coach Steve himself. Steve’s expertise must have helped as the Warriors ended the 2016 regular season with a 73-9 record, the best in NBA history.

5. His children are sports superstars, too. Steve and his wife, Margot Kerr, have three children. Their middle child, Maddie Kerr, was one of the top volleyball players in the country in high school, according to Heavy.com, and she played for Berkeley. Her brother, Nick Kerr, played basketball for the University of San Diego.

Catch Steve, Michael and other NBA stars on The Last Dance when the first episode premieres on ESPN on Apr. 19.