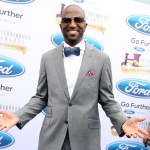 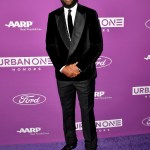 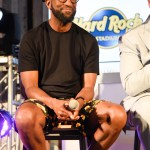 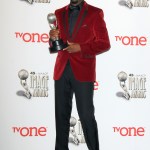 While holding back tears, radio host Rickey Smiley announced that his teenage daughter had been shot over the weekend. As this beloved comedian rushes to his baby girl’s side, here’s what you need to know.

UPDATE #2 (7/6/20 10:15pm ET): Aaryn Smiley has updated how she is doing. “This is the most terrifying thing that has ever happened to me,” she wrote over an Instagram story photo of a blood-stained car seat. “I won’t be out of the hospital for a while, nor will I be able to walk for a while due to nerve damage. So I’m sorry if I can’t respond to everyone but please know I’m thankful for all of the messages.”

UPDATE (7/6/20 8:30pm ET): Rickey Smiley has arrived in Houston, but can’t see his daughter in the hospital yet due to restrictions surrounding the coronavirus. He shared a photo to his Instagram page wearing a face mask and wrote, “I respect the rules. Can’t see my daughter @ryn.smiley because of #covid19…it’s getting dark and I’m not leaving this park until I lay eyes on her. #Houston (Thanks to the @HoustonPolice for being so awesome and kind to us).” He also shared that Aaryn, “made it out of her operation. She’s doing great!! Thank you for your prayers!!”

“My youngest daughter was shot last night. Aaryn, she in the hospital right now,” Rickey Smiley said during the July 6 episode of the Rickey Smiley Morning Show. As he struggled to maintain his composure, the comedian/radio show host revealed that his 19-year-old daughter is “doing alright” and currently awaiting surgery at a Houston hospital. According to Rickey, his daughter was getting foot at a Whataburger over the weekend when shots rang out. “That’s why I can’t have focus — I’m just so angry right now. … I’m trying to focus, trying to do the show, trying to figure out – because there aren’t hardly any flights, because of COVID. I’m [going to] have to fly to Dallas and then drive down to Houston.”

“She’s crying. She’s scared. I can’t get to her,” he added. “I just hate it.” The Official @RickeySmileyMorningShow Instagram shared a picture of him alongside Aaryn, and asked for fans to “please continue to keep Aaryn, Rickey, and the Smiley family in your prayers.” Back on his radio show, Rickey vented about his frustration over gun violence. “This is no discredit to Black Lives Matters because I believe that, and I am with that movement, but there are some criminals in our community that we need to do something about…I get the luxury of going to the hospital, but just think about all the parents that got to go pick out a casket this morning!”

As Rickey and his family deal with his horrible incident, here’s what you need to know.

1. Rickey Smiley is a comedian, television host, and nationally syndicated radio personality. The man born Broderick Smiley has practically done it all. The Alabama native got his start in 2000 as the host of BET’s ComicView, per AllMusic. From there, his career took off like a rocket. In addition to hosting his radio show, Rickey can be seen on Dish Nation. He’s the star of his own sitcom (The Rickey Smiley Show) and reality TV series (Rickey Smiley For Real), both on TV One. As a comedian, he’s been featured on Def Comedy Jam and Showtime at the Apollo. He’s also been in films like Baggage Claim, Stomp The Yard 2: Homecoming, and Friday After Next.

2. Rickey is known for his prank calls. In the grand tradition of Howard Stern and the Jerky Boys, Rickey perfected the prank call after landing the morning show at KBFB in Dallas, Texas, in 2004. Using a full cast of characters, Rickey would wreak havoc on unsuspecting bystanders, but he eventually outgrew it. “I have a whole new act now,” he told the South Florida Sun-Sentinel. “I used to run backstage and do a real quick change and do a character. I might start that again eventually, but I have so much stuff, you know, turning 50 and it’s so funny. I’m really excited. It’s just stories – the kids, the grandson, stuff like that.”

3. He’s close to Erykah Badu. “We’ve been friends since college,” he said of Erykah Badu when talking to the Sun-Sentinel in 2019. “She went to Grambling [State University], and I went to Alabama State [University]. And all that time we’ve been doing what you call ‘snapping’ on each other, or ‘playing the dozens.’ We’ve been doing that since college, way before either one of us was famous. Then we went to work under Steve Harvey, right out of college. We are like best friends. She’s like my sister from another mother. We absolutely love each other.”

4. He’s the father of ten kids. Sorta. “I have two biological kids,” he said during a 2015 episode of The Real. “The rest are adopted, mixed with nieces and nephews.” Rickey said that losing his father when he was six-years-old inspired him to “opening up [his] heart and home” to children of similar circumstances.