1. Nia said she couldn’t believe Michelle Obama was a fan. Nearly one week after her now-viral performance, Nia appeared on The Ellen DeGeneres Show to discuss the routine. “This routine, I believe, is a reflection of everything that I am as a woman today,” the UCLA senior said on January 28. “I picked a lot of really influential artists, Black artists that had a huge impact on the Black community.” Just two days prior, Michelle Obama tweeted, “Now that’s what I call fierce! You’re a star, @DennisNia.” The gymnast said it was “so insane”, adding, “Oh my gosh. Michelle Obama, first of all I love you, I was speechless.”

2. This isn’t the first time a routine of hers has gone viral. Nia previously became a viral sensation on Feb. 28, 2020 after her Beyonce-inspired floor routine circulated throughout the internet. While so many of Nia’s dedicated and newly budding fans felt her 9.975 final score should have been a perfect 10, her floor routine nearly helped UCLA clinch the first place spot over Utah, with the latter team beating UCLA 198.075-198.025. 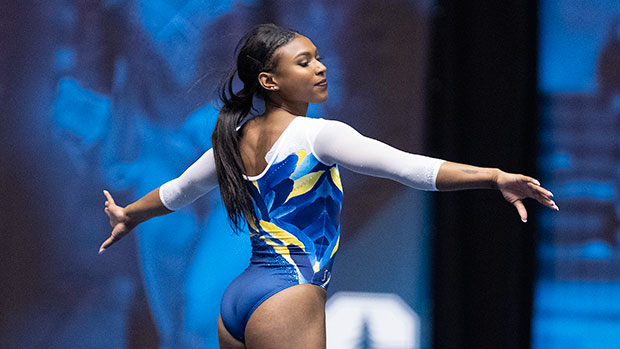 3. Nia became a skilled gymnast at a very young age. Born in Columbus, OH in February 1999, Nia became a National team member in 2012 after training for a number of years. Nia began to build her skill set as a gymnast at the Buckeye Gymnastics center. However, she left Ohio in 2015 to pursue her training at Legacy Elite Gymnastics. She currently lives in Naperville, IL when she is not studying or participating on the gymnastics team at the University of California, Los Angeles.

4. She’s been representing the United States for years. Nia is already a professional athlete competing for the United States in a number of tournaments. While she began as a member of the National team in 2012, she went on to represent America on the international stage in 2014 at the age of 15!

5. Nia is already a decorated medalist. The young gymnast already has a slew of medals to her name. At the 2014 Pacific Rim Championships, Nia and her team earned a gold medal for their team efforts, while Nia earned two individual silver medals for All-Around and for Vault. At the 2013 U.S. Classic, Nia won a gold medal for Vault and a silver for her Floor routine. In 2018, her UCLA team won the gold and in 2019 their team won the bronze medal at the NCAA tournament, respectively.