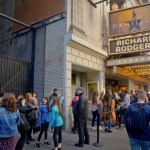 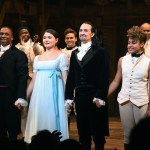 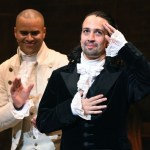 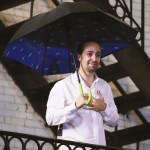 Miguel Cervantes and his wife suffered the devastating loss of their three-year-old daughter, Adelaide, on Oct. 12. The couple shared the terrible news with fans in an emotional Instagram post.

Miguel Cervantes, 42, is one of the effervescent cast members that brings the Tony winning Broadway hit, Hamilton, to life every night. But recently, the actor and singer was dealt an incredibly horrific personal blow when his daughter, Adelaide, passed away at the age of three years old after suffering from epilepsy. Miguel and his wife, Kelly, 37, shared the news with followers on Kelly’s Instagram account on Oct. 13. “We love you so much Adelaide bug and forever after,” the post said. With the harrowing news, here are five things you should know about Miguel Cervantes.

1) He’s the current star of Hamilton in Chicago. While Tony winner Lin-Manuel Miranda originated the role of Hamilton on Broadway, the show eventually hit Chicago, with Miguel taking on the starring role. Miguel joined the cast in the titular role in 2016 at the Chicago Private Bank Theater and has been performing the lead since the production hit. However, given the news of his daughter’s passing, Miguel will be taking a break from Hamilton as he and his family mourn their loss.

2) Hamilton isn’t his first theater role. Miguel has been in a number of other major shows prior to his leading role in Hamilton. The performer appeared in 2010’s American Idiot, based on the music by Green Day, as a member of the ensemble cast. In 2014, he had a small role in the show If/Then starring Tony winner and Frozen star Idina Menzel. He played a bartender in the show and earned the role of David’s, a supporting character in the production, understudy.

3) He doesn’t just do Broadway. Miguel’s major credits come from the stage, but he has also appeared on screen. Some of his major roles include a 2014 episode of The Blacklist, a 2016 episode of Madam Secretary, and a 2016 episode of Person of Interest.

The machines are off. Her bed is empty. The quiet is deafening. Adelaide left us early Saturday. She went peacefully in her mother's arms, surrounded by love. Finally, she is free from pain + seizures but leaves our hearts shattered. We love you so much Adelaideybug and forever after 💔💜

4) Miguel is a trained performer. Miguel earned his BFA in Musical Theater from Emerson College in Boston, Massachusetts. While attending college, he trained in singing, ballet, tap, and jazz.

5) He’s dedicated to epilepsy research. Miguel’s daughter spent her entire life battling seizures and was officially diagnosed with epilepsy at seven-months old. Two months later, she was diagnosed with infantile spasms. Miguel and his family were very open about their daughter’s experience, chronicling her progress on his Instagram account regularly. In the bio of his Instagram account, Miguel also has a link to cureepilepsy.org. The link takes followers to a blend of coffee they can purchase called Adelaide’s blend in honor of Miguel’s daughter. By purchasing the coffee blend, followers and fans can support research into epilepsy and infantile spasms.