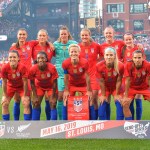 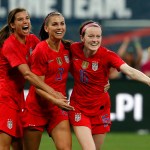 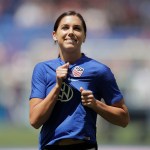 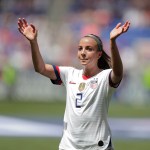 She just turned 21 and she could become a World Cup champion. Mallory Pugh is one of the youngest stars on the US Women’s National Team, so get the scoop about this soccer star.

When the United States Women’s National Team takes the field during the 2019 Women’s World Cup, all eyes will be on the Americans. The USA team are the defending champions, so the pressure’s on. One person ready for the challenge of going back-to-back is Mallory Pugh. The young soccer prodigy turned 21 on April 29, and she’s ready to celebrate her year by winning the biggest tournament in women’s soccer. Before the games kick off on June 6, here’s what you need to know about Mal:

1. She’s a Colorado native. Mallory Diane Pugh was born in Highland Ranch, Colorado, the daughter of a long-distance runner (her mom) and a track/football player (dad.) After attending Moutan Vista High School, she joined UCLA as part of the soccer team. She played three non-competitive Spring scrimmages in early 2017, before announcing her decision to leave school and turn Pro. Since then, she has been part of the Washington Spirit of the NWSL.

2. She started playing soccer because her older sister did. “She got dragged around everywhere like younger siblings do,” Mallory’s older sister, Bri Pugh said, per 5280.com. Bri, who was 5 when Mallory was born, began playing soccer. Mallory followed her big sis’s example. “And all of us, we joke about it now. We’re like, ‘Great, we taught her everything we know, and she’s this superstar now, and we’re working jobs.’ ” Brie added. She played club soccer with Real Colorado in the Elite Clubs National League, competing at the U-11 through U-18 levels. She helped Real Colorado win state titles in 2010 and 2011.

3. She’s fast. Mallory began watching games on Telemundo when she was four or five. She was influenced by Ronaldinho and the Brazilian’s style of play, but she’s been compared to two other legends. “She seems to gain speed when she’s running with the ball,” says Lorne Donaldson, Real Colorado’s president and executive director of coaching. “That’s all the top players, they look like they’re faster. Messi, Ronaldo—they’re running with the ball, and they look faster.”

4. She’s part of the BeyHive. During the 2019 SheBelieves Cup, the U.S. federation’s own international tournament meant to celebrate women, the US Women honored “powerful, influential, iconic and inspirational women” by wearing their names on the back of their jerseys during their March 2 game against England. Mallory picked Beyonce. “She’s a badass. She’s confident and is just a good role model for women in general because she represents something that is so much bigger than herself. She’s inspiring in her industry and all over the world. She is a person who allows and shows women that they can be who they are and flaunt it,” she said.

5. She’s focused on this moment. “I have a goal,” she wrote in The Players’ Tribune. “It’s for this year, for the World Cup and beyond: I want to be the best at everything I do. Mia Hamm was one of my biggest heroes growing up, so I’m hoping that I can make a statement at this summer’s World Cup — just like she did back in 1999. I’m hoping to get into one of those Mia Hamm Zones. I’m getting there.”