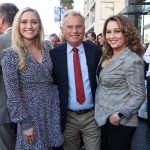 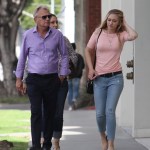 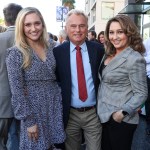 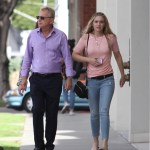 While Vanna White is filling in for Pat Sajak on ‘Wheel Of Fortune,’ his daughter, Maggie is taking on Vanna’s coveted role. Here are five things to know about her!

Wheel Of Fortune is keeping it all in the family! As legendary host Pat Sajak continues to recover from his emergency surgery and deals with varying scheduling technicalities, letter-turner Vanna White is taking over hosting duties. Naturally, that left the coveted role held by Vanna available, and the show found it’s star. Maggie Sajak, Pat’s 25-year-old daughter, has taken over letter-turning duties for the week of January 6-10 on the show. But before you gear up to buy a vowel for the next episode, here’s what you need to know about Maggie!

1) She’s a Country music singer. Maggie isn’t only known for turning letters on Wheel Of Fortune. Her real passion is music and as early as 12 started playing guitar and writing songs. Her debut single, “First Kiss,” was released in 2011 when Maggie was just 16-years-old. The music video for the song was directed by CMT Music Award winning director Trey Fanjoy in Nashville and was featured on an episode of Wheel Of Fortune.

2) This isn’t her first time on the Wheel Of Fortune stage. Maggie made her first appearance on the show when she was only one! As a tiny tot, her father brought her out and introduced her to Vanna and the audience while she giggled and cooed and did her best to maintain her balance. “I’m walking a little better now, and hopefully I’m a little more eloquent than last time,” she said in jest on the Jan. 6 episode.

3) She’s appeared in Teen Vogue. To take over for someone like Vanna, you have to have model-esque looks and Maggie has shown before that she boasts just that! In Teen Vogue‘s July 2013 issue “Get Schooled in Fall’s Smartest Denim,” Maggie posed for a few photos and even mentioned her favorite style of jeans. “My go-to is definitely a dark-wash, low-rise skinny. I can dress it up or down depending on the style I want that day,” she previously shared with the outlet.

5) She can play multiple instruments. Besides guitar, Maggie can also play piano, ukulele, and mandolin.