UPDATE: Lori Loughlin has reportedly began her prison sentence at a federal prison in Northern California on Oct. 30, 2020, according to TMZ. The Fuller House star was originally ordered to report to prison anywhere between Oct. 30 to Nov. 19, meaning she chose the earliest day possible.

UPDATE: Lori Loughlin appeared in a Los Angeles federal courtroom on March 13 where Judge Steve Kim set her bail at $1,000,000 on the conspiracy to commit mail fraud charges related to the college bribery scheme, per our sister site Variety. Her husband Mossimo Giannulli, who is also charged in the case received the same bail amount. The couple made bail by securing home and other assets as bond. Judge Kim reluctantly allowed Lori to her keep her passport and has permitted her to travel to Canada after Lori’s attorney argued she has committed to film projects in Vancouver in April and May, as well as a series set to begin in July. Judge Kim is allowing her to travel there only as long as the court is made aware of her destinations and lengths of her stays.

UPDATE: As the college admissions bribery scandal unfolded on March 12, Lori’s 19-year-old daughter Olivia Jade Giannulli spent the night aboard the yacht of the Chairman of USC’s Board of Trustees Rick Caruso in the Bahamas per TMZ. She is friends with the LA billionaire’s daughter Gianna and was there with pals for spring break. “My daughter and a group of students left for spring break prior to the government’s announcement yesterday. Once we became aware of the investigation, the young woman decided it would be in her best interests to return home,” Caruso told the site about Olivia. He stressed that it is not up to him but USC’s president  as to what the YouTube star’s fate with the University is following the bribery scandal.

Lori Loughlin, 54, is widely loved as the fan favorite, “Aunt Becky” on the hit family sitcom, Full House. But, the beloved actress added a scandal to her Hollywood resume on March 12, when unsealed legal documents stated that the actress was involved in a collegiate admissions scam, where she and other wealthy individuals payed up to $6.5 million to get their kids enrolled into high-profile D-1 universities. Loughlin was arrested, along with actress Felicity Huffman, 56, for their involvement in the scandal. As the investigation continues, here’s five fast facts about Loughlin.

1. Lori Loughlin is an American actress and producer from Queens, New York City. — Loughlin started off in the entertainment business as a child model. At age 15, she went on to star in the soap opera, The Edge of Night. She’s appeared in numerous television shows and movies, with her most notable gigs being Full House and its Netflix sequel, Fuller House. Loughlin’s starred in the CW series, 90210 (2008-2011, 2012); Garage Sales Mystery (2013-present); and When Calls The Heart (2014-present). She was a co-creator, producer and actor on the two seasons of The WB series Summerland (2004–2005).

2. She is best known for her role as Rebecca Donaldson–Katsopolis on the family sitcom, Full House. — Loughlin, whose character was famously known as “Aunt Becky”, starred on the show from 1988–1995. After the show’s popularity, Netflix developed a sequel to the original series, Fuller House in 2016. Loughlin’s made numerous appearances on the show, which is expected to end after its fifth season in 2019. 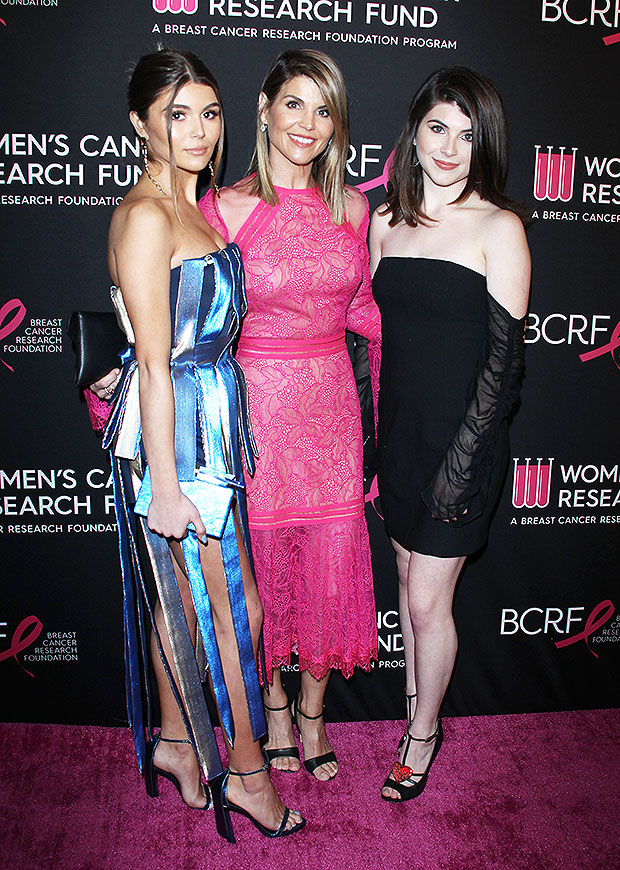 3. Loughlin has two daughters. — Isabella Rose, 20, and Olivia Jade, 19, who she shares with her second husband, fashion designer Mossimo Giannulli. The pair tied the knot on Thanksgiving in 1997. Loughlin was previously married to investment banker, Michael R. Burns from 1989 to 1996.

5. She supports many causes. — In 2016, Loughlin teamed up with Emergen-C® and charity: water to help bring clean and safe drinking water to people in Ethiopia, so children can get to school. She was a spokesperson for the “Water Transforms Lives” campaign.