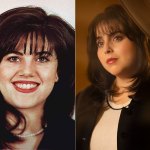 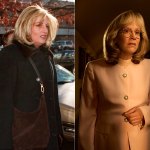 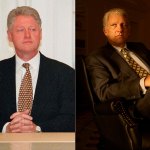 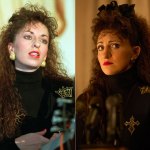 Linda Tripp is one of the key figures of ‘Impeachment: American Crime Story,’ and Sarah Paulson is playing the woman who helped expose Monica Lewinsky’s relationship with President Clinton.

The latest season of American Crime Story focuses on the series of scandals that led to the impeachment of President Bill Clinton. Linda Tripp was one of the central figures in the Clinton-Lewinsky scandal. American Horror Story veteran Sarah Paulson completely transforms into Linda Tripp.
The Clinton-Lewinsky scandal was covered extensively in the 1990s, and now American Crime Story is exploring what happened with a fresh lens. From Linda’s relationship with Monica Lewinsky to her later years, here’s what you need to know about Linda Tripp.

Linda was a whistleblower, known for her prominent role in the Clinton-Lewinsky scandal. Monica, a former White House intern, confided in Linda after they met while working at the Pentagon, with Linda later recording her private phone calls with Monica. In those phone calls, Monica spoke explicitly about her relationship with President Clinton. Linda encouraged Monica to save the blue dress that had President Clinton’s semen on it. Monica did not know their conversations were being recorded. Linda handed the tapes over to special prosecutor Ken Starr, who was investigating Clinton, in exchange for immunity from wiretapping charges. Linda’s actions helped lead to Clinton’s impeachment. He was impeached by the House of Representatives in December 1998 but later acquitted by the Senate in 1999.

2. Linda worked at the White House and at the Pentagon.

3. Linda only had one regret when it came to exposing the Clinton-Lewinsky scandal.

On Slate’s Slow Burn podcast in 2018, Linda said her only regret about telling Ken Starr about the Clinton-Lewinsky relationship was “not having to guts to do it sooner.” She explained her view of the situation as an abuse of power. “How it was presented to the country initially is how it continues to be referred to today, which is an affair, the Lewinsky affair. But by virtue of using that word, one assumes it was in some way an actual relationship of sorts—romantic, physical, whatever, it was a relationship—which couldn’t be farther from the truth. What it was was a series of encounters to address a physical need, a use of a young girl, and then the sort of cold, hard dismissal of her on any human level,” Linda said.

4. She was married twice.

Linda married Bruce Tripp in 1971. They had two children together. Linda and Bruce divorced in 1990. Linda went on to marry Dieter Rausch in 2004.

Linda revealed she had breast cancer in 2003. She died on April 8, 2020, of pancreatic cancer. She was 70 years old. Upon hearing about Linda’s condition before her death, Monica tweeted, “No matter the past, upon hearing that Linda Tripp is very seriously ill, I hope for her recovery. I can’t imagine how difficult this is for her family.”