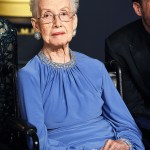 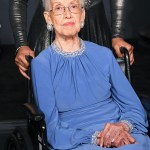 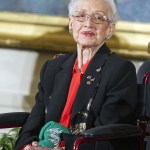 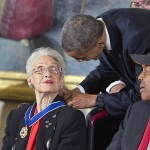 At the age of 101, Katherine Johnson passed away, leaving behind a legacy dedicated to NASA’s space programs. Here are five things you need to know about the remarkable woman depicted in ‘Hidden Figures.’

Katherine Johnson was, for a time, one of the great unsung American heroes of the space race. The mathematician, who passed away on Feb. 24 at the age of 101, worked at NASA during in the 1950s and 1960s and played a major role in calculating the trajectory and path that would help America get into space. Her story went relatively unknown until the publication of the novel Hidden Figures and release of the film of the same name in 2016. Leaving a powerful legacy behind her, here are five things you need to know about this American hero.

1) Katherine Johnson was part of the team responsible for getting men into space and the moon. Katherine worked as, essentially, a computer during her time at NASA in the 1950s. She would compute the formula to find the path needed to send men into orbit and safely return them to Earth. Of her time at NASA, Katherine has said, “It was my job. And I did my job correctly and well.”

2) She was asked by John Glenn to work on calculations. In 1962, John Glenn was the astronaut who orbited the Earth for the very first time. Prior to being sent into space for the historic event, John asked that Katherine double check the calculations that had been generated for his path. On Feb. 20, 1962, John successfully orbited the Earth thanks, in large part, to the unmatched work and talent of Katherine.

3) Katherine’s story was adapted to the screen. In 2016, Hidden Figures, based on the book by Margot Lee Shetterly, was adapted to the screen and starred Octavia Spencer as Dorothy Vaughn, Janelle Monae as Mary Jackson, and Taraji P. Henson as Katherine. The film chronicled the women’s lives during the late ’50s and early ’60s at NASA, navigating their working environment while in a time of segregation. The movie was nominated for three Oscars, including Best Picture, at the 2017 Academy Awards.

4) She was honored with the Presidential Medal of Freedom. On Nov. 24, 2015, President Barack Obama bestowed the Medal Freedom to Katherine for her legacy and contributions to the United States. Katherine was cited as a pioneering example of African American women in STEM roles. It is the highest honor a civilian can receive.

5) Katherine leaves behind an indelible legacy at NASA. Because of Katherine’s various calculations in the 1950s and 1960s, Katherine’s work influenced every major space program that followed John Glenn’s orbit around Earth. In a statement by NASA Administrator, Jim Bridenstine, shared “NASA will never forget her courage and leadership and the milestones we could not have reached without her.”