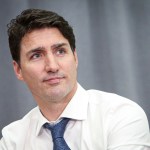 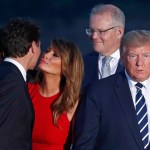 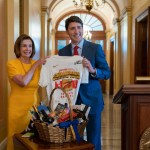 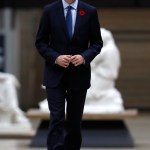 Despite facing scrutiny in a brownface scandal, Justin Trudeau is now expected to be re-elected as Canada’s prime minister. Here’s what you should know about the Liberal leader.

UPDATE: 10/22/19, 12:43 am: Four years after serving as Canada’s prime minister, Justin Trudeau was projected to win his country’s election and serve a second term, per the Canadian Broadcasting Corporation. However, Justin’s Liberal Party only secured a minority government, according to CBC News. All eyes were on this election, after Justin was at the center of a big scandal for wearing brownface to a costume party while teaching at West Point Grey Academy nearly two decades ago. Justin later apologized to the public, telling reporters in Sept. 2019, “It was something I didn’t think was racist at the time and now I recognize it was something racist to do and I am deeply sorry.”

ORIGINAL: A father, a friend, a comedian. It’s easy to say that Justin Trudeau is the whole package. He was named Canada’s new Prime Minister in Oct. 2015, and we just had to know more about him. Here are five things you need to know about the Canadian politician and his life.

1. Trudeau is breaking many firsts. Trudeau is the first Canada Prime Minister born in Ottawa, Canada’s capital, and the first prime minister to be the offspring of a former PM. His father was prime minister Pierre Trudeau. Just months after Justin was born, US President Richard Nixon predicted his future during a Canadian state dinner, saying, “I’d like to toast to the future prime minister of Canada: To Justin Pierre Trudeau.” US President Barack Obama referenced this at this year’s state dinner. His father went to be one of the most famous Canadian politicians.

2. He had many careers before becoming a politician, including boxing and teaching. Trudeau earned his bachelor’s degree in 1994 after studying literature at McGill University; he then pursued an education degree at University of British Columbia, which he completed it in 1998. He was then a teacher for several years in Vancouver before heading into politics. He was elected into the Parliament in 2008. In 2012, he got in the boxing ring against Canadian Conservative Senator Patrick Brazeau in a charity boxing match. He won in three rounds! He then became the leader of Canada’s Liberal Party in 2013.

3. He’s actually pretty funny. During his toast at the Canada State Dinner in the United States in March, Trudeau said, “May the special connection between our two countries continue to flourish in the years to come, and may my grey hair come in at a much slower rate than yours has,” to President Obama. As a side note, ,any notice how tall the President is at 6’1″ — but Justin Trudeau is actually taller by an inch. This is probably why they look so good in photos together.

4. He has a pretty hot tattoo. Not many leaders have tattoos (that we know about), but his left shoulder is actually covered. When he was 23, he got a large tattoo of the planet Earth. When he was 40, he added more, making the planet surrounded by a Haida raven. Trevor Noah is a fan, as he revealed his crush on Justin during The Daily Show.

5. He stripped once… for charity. In 2011, he performed a partial striptease for a charity event — the What a Girl Wants gala for liver disease research, raising $1,900. He threw off his suit, ripped his tie and went down to his white tank. The winning bidder got to have lunch with him at Ottawa’s Parliamentary restaurant.