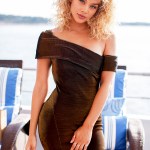 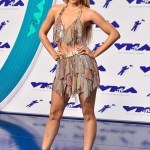 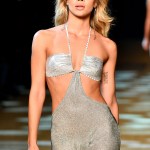 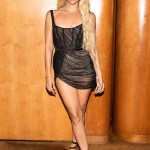 Meet your SI Swimsuit Rookie of the Year: Jasmine Sanders! In addition to being gorgeous, the ‘Golden Barbie’ is besties with Kylie Jenner and Kim Kardashian. Get the scoop on this breathtaking beauty.

She’s just a Barbie girl, in a Barbie world, and now she’s the 2019 Sports Illustrated Swimsuit Rookie of the year. The publication crowned 28-year-old Jasmine Sanders the ROTY on August 1, and SI Swimsuit editor MJ Day couldn’t be happier with the choice. “The thing about Jasmine is that there is an instant connection to her when you meet her,” said MJ Day, per Sports Illustrated. “Regardless of if it is in person or at an event or across all of the SI Swimsuits platforms, you are immediately drawn to her. She is the most warm and authentic human being. The beauty insider matches the beauty outside.”

“I’m so excited to be part of the Sports Illustrated family!” Jasmine said in Nov. 2018. “I love that they celebrate all types of women with different body types from different backgrounds. I can’t wait to be alongside such icons as Tyra Banks, Heidi Klum, Irina Shayk, Chrissy Teigen, and Ashley Graham, just to name a few.” Jasmine’s well on her way to becoming a supermodel like the names she dropped, so here’s the scoop on this stunning vision:

1. She was born in Germany but raised in South Carolina. From Frankenthal, with love. Jasmine’s mother is German, and her father is African-American, who was stationed in Germany with the U.S. Army. When she was 1-years-old, she moved to Columbia, South Carolina. It was there that she fell in love with fashion. “There are photos of me when I was really young just sitting around with a bunch of magazines, flipping them upside down and looking all crazy at the photos,” she told Ocean Drive.

2. “Golden Barbie” is a childhood nickname. “I had a teacher who used to call me Goldilocks in school because of my curls, and my friends used to tell me I looked like a life-size Barbie,” she told Vogue in 2016. “One day, my sister and I were playing around with silly usernames for social media, and we put the two together. ‘Golden Barbie’ had a ring to it that I liked, so I stuck with it. I’m actually thankful my following knows me as Golden Barbie, versus some of the other names we suggested!”

3. You’ve probably seen her in a magazine. As of August 2019, Jasmine has 3.5 million Instagram followers. Since starting her modeling career as a teenager, she has built her fanbase by appearing in numerous editions of Vogue (American, British, Italian, Russian and Arabian); posing for magazines like Esquire, Glamour, GQ and W; and modeling for advertising campaigns for brands like Ralph Lauren, Gap, Victoria’s Secret PINK, American Eagle, and Roberto Cavalli. She even attended the Met Gala in 2018 as a guest of H&M.

4. She has some famous friends. Do the names Kim Kardashian or Kylie Jenner ring a bell? Jasmine considers them BFFs. In 2016, Jasmine appeared on Kim’s Instagram account when the two were vacationing in Mexico. That year, Jasmine appeared in Kylie’s “Glosses” video. “Kylie is a little makeup guru,” she told Marie Claire in 2016. “She’s taught me how to do some great brows. Plus, how to get a nice shine and contour. Honestly, she doesn’t let me walk around looking crazy, so that’s a good friend right there.”