Update May 24, 2019: Jake Patterson, 21, was sentenced to life in prison without parole on May 24, after previously pleading guilty to abducting Jayme Closs, 13, and murdering her parents James Closs and Denise Closs, according to The New York Times. Jayme wrote a statement about the kidnapping and the homicide, which was read by her lawyer at the hearing in Barron County Circuit Court: “He tried to steal me. And he didn’t care who he killed or who he hurt. He thought that he could own me, but he’s wrong. I was smarter. He thought he could control me, but he couldn’t. He could never take away my spirit. He thought he could make me like him. But he was wrong.”

Update March 27, 2019: Jake Patterson, 21, pleaded guilty to two counts of first-degree intentional homicide and one count of kidnapping on March 27, per The Daily Beast, bringing an end to a heartbreaking tragedy. Jake admitted to fatally shooting James Closs and his wife, Denise Closs, in their Barron, Wisconsin home on Oct. 15, 2018, before kidnapping their young daughter, Jayme Closs, 13. Barron County prosecutors said they will drop the burglary charge against him, and will not file charges for any crimes in Douglas County, which occurred while Jayme was in captivity.

He now faces life in prison, as he waived his right to a trial with a guilty plea. “We represent him, we work for him, and this is what he wants,” his attorney, Richard Jones, said in Barron County Court Wednesday. “[Patterson] has wanted to enter a plea since we met him.”

Original Jan. 11, 2019: Jayme Closs, 13, went missing October 2018, the same month after police discovered her parents murdered in their Barron, Wisconsin home. Nearly three months after she vanished, Jayme was found alive on Jan. 10. Shortly after she was found, the Barron County’s Sheriff’s Office said a suspect was taken into custody, according to NBC News, and on Jan. 11, the authorities released his name: Jake Thomas Patterson, 21. As the details surrounding this horrible murder and this young girl’s disappearance come to light, here are the details we know about her suspected abductor.

1. He was first held on numerous charges. Jake Thomas Patterson, of Gordon, Wisconsin, is being held in jail on two charges of first-degree intentional homicide of Jayme’s parents, James Closs, 56, and Denise Closs, 46, according to NBC News. He was also charged with one count of abduction. Jake, according to the Carron County’s sheriff, does not have a criminal history locally or in the state of Wisconsin.

3. The officer revealed Jake’s identity for the first time during the press conference. The world got its first major look at Jake when the sheriff showed his mug shot, revealing a 5’11, balding white male with glasses. 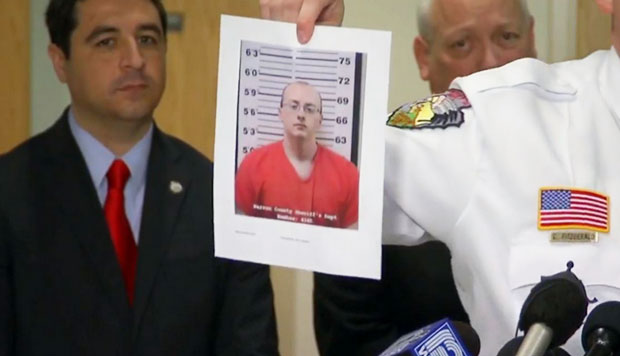 4. He allegedly kept her hidden from the public for months. “Jayme was taken against her will and escaped from a residence in which she was being held,” said Barron County Sheriff Chris Fitzgerald at a press conference, according to the New York Post. “The subject planned his actions and took many proactive steps to hide his identity from law enforcement and the general public.”

5. Jayme helped the authorities catch him. After three months, Jayme suddenly turned up at the doorstep of Peter and Kristin Kasinskas in Gordon, WI, along with one of the couple’s neighbors. Jayme reportedly approached a resident who was walking their dog and provided a description of the car she fled from, leading to Jake Thomas Patterson’s arrest.

“She kind of flung the door open and said, ‘Call 911, this is Jayme Closs!” Kristin recalled. “I knew it was her the second she walked in the door.”

We’ll continue to update this post with any new information about her alleged kidnapper.