“It’s with great sadness that we have to announce the death of Honor Blackman, aged 94,” her family said in a statement to The Guardian on Apr. 6. The actress, known for her role of Pussy Galore, opposite Sean Connery’s James Bond in 1964’s Goldfinger, died “peacefully of natural causes at her home in Lewes, Sussex, surrounded by her family,” according to the statement. The statement added that her death was unrelated to the coronavirus pandemic. “She was much loved and will be greatly missed by her two children Barnaby and Lottie, and grandchildren Daisy, Oscar, Olive, and Toby.

“As well as being a much-adored mother and grandmother, Honor was an actor of hugely prolific creative talent,” the statement continued, “with an extraordinary combination of beauty, brains and physical prowess, along with her unique voice and a dedicated work ethic, she achieved an unparalleled iconic status in the world of film and entertainment and with absolute commitment to her craft and total professionalism in all her endeavors she contributed to some of the great films and theatre productions of our times.” As James Bonds fans mourn the loss of perhaps the most famous “Bond Girls” of all time, here’s what you need to know about the late Honor Blackman.

1. Her acting career spanned almost seven decades. Honor was born in 1925 in London’s East End, the daughter of a British civil servant and a homemaker mother. After studying at the Guildhall School of Music and Drama, she began acting in the late 1940s, with her first listed role being Emma in 1947’s Fame Is The Spur. Her early roles included appearances in films like Diamond City and Come Die My Love, and on television shows like Probation Officer, The Vise, and Danger Man. Her last television role, according to her IMDB profile, is that of Rose Walker on You me & Them in 2015.

2. Her big break came when she joined The Avengers. Though the world has come to associate Captain America, Black Widow, The Hulk, and other Marvel heroes as “The Avengers,” the group shares its name with a famous British television show of the 1960s. Honor was cast in 1962 as the leather-clad crimefighter Cathy Gale on The Avengers, opposite the dapper Patrick Macnee’s John Steed. Honor had to learn judo for the role, and her proficiency for martial arts would help her land a gig that would transform her from a rising TV star to a pop culture icon. 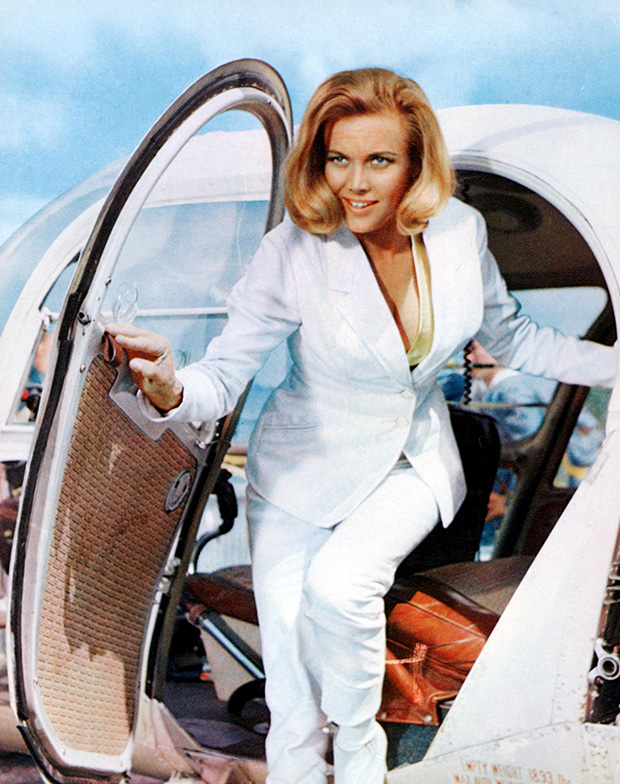 3. Honor is best known for her role in Goldfinger. Odds are, if someone is asked to name a Bond Girl, they would say “Pussy Galore.” The provocatively-named character appeared in 1964’s Goldfinger, the third James Bond film and one that was a global hit. Pussy, played by Honor, was a villainous femme fatale assisting Auric Goldfinger (the late Gert Fröbe) in his attempt to rob Fort Knox. The film featured Sean Connery as 007, and Honor praised his take on the character in 2007.

“Sean was a very fortunate gentleman because he was so good at the part,” she told The Guardian. “Everybody thinks he was playing himself, but Bond isn’t exactly an Edinburgh milkman. He’s a fine figure of a man, sexy beyond belief.” Though her role would transform her into a pop culture icon, Honor expressed regret leaving The Avengers for the role. “I walked away at the wrong moment. They were just going from black and white to color, they were starting to get real film money.”

Honor is also known for her role as Hera in 1963’s Jason and the Argonauts. After Goldfinger, she continued to appear in film, on stage, and on television series (including a role as Professor Lasky in Doctor Who in 1986.) She also famously portrayed Rula Romanoff on the beloved British series Coronation Street.

4. Honor was a pop star. In the same year as Goldfinger, Honor and Avengers co-star Patrick Macnee recorded “Kinky Boots,” a song referring to the knee-high boots she frequently wore on the television show. Over 25 years after its release, it became a charting hit, peaking at No. 5 in 1990. It wasn’t the only song in Honor’s catalog. She released a full album Everything I Got, a full album, in 1964.

5. She was a committed activist. “Most of the Bond girls have been bimbos. I have never been a bimbo,” she told The Guardian in 2007. A fierce republican (in the British sense) she was a committed activist, campaigning for the Liberal party and later becoming a member of the Liberal Democrats. She famously turned down a CBE in 2002. “Because I’d have been a hypocrite,” she said. “We’re supposed to be a democracy, and we, quite shamefully, are not.” She also worked on the campaign to demand compensation payments for pensioners/retirees who lost savings in the Equitable Life scandal.

Honor was married and divorced twice – first to Bill Sankey, then to Maurice Kaufmann. Along with Maurice, she adopted two children, Lottie and Barnaby. Our thoughts are with her family, friends, and loved ones during this time.