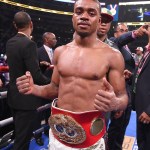 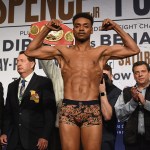 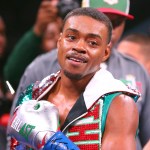 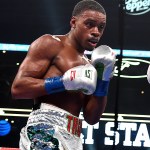 The champ is down, but not out. Boxer Errol Spence Jr. was hospitalized after being flung from his car in a severe crash. Here’s what we know so far.

Unified welterweight world titlist Errol Spence Jr. “was in an accident, and his parents are with him at the [Dallas] hospital,” Premier Boxing Champions spokesman Tim Smith told ESPN on Oct. 10, hours after the 29-year-old boxer was seriously injured in a one-car crash. “The doctors are monitoring his condition, but his injuries are not life-threatening. We will have further updates as the doctors update his condition. We’re all wishing the best for Errol.”

The crash happened before 3 a.m. on Riverfront Boulevard near 1-30, according to CBS DFW. Police told the news outlet that the vehicle was “going at a high rate of speed in the northbound lanes in the 500 block of S. Riverfront Boulevard.” The vehicle, a white Ferrari, reportedly went over the center median and flipped multiple times, ejecting the driver. Errol was reportedly not wearing a seatbelt. The exact cause of the crash is still under investigation, and police told CBS DFW that while the boxer is in serious condition, he’s expected to survive. As Errol recovers, here’s the scoop on this boxing star:

1. He’s an American boxer. Errol was born in Long Island, but he grew up in the Cedar Hill-DeSoto part of Dallas County. His parents moved south when he was two-years-old at the time, per Dallas News. When Errol defeated Hell Brook in 2017 to win the IBF welterweight championship, he became the third boxer from Dallas County to hold a world title. Though Errol hails from DeSoto, he feels like he represents the city of Dallas as a whole.

2. His nickname is “The Truth.” In any boxing fight, the first punch thrown is with the competitor’s nickname. For Errol, he’s called “The Truth,” and he credits a commentator for christening him that. “The nickname started from a commentator. He was announcing in the ring in the Golden Gloves. He just started calling me The Truth. And then there was a heckler in the crowd every time that I won, and he was yelling ‘The Truth! Truth! Truth!’ every fight. It was like five days in a row. And people started calling me that.

3. He’s undefeated. Errol is a southpaw who packs a lot of power in his punches. He won the International Amateur Boxing association world championship in 2008 and captured the U.S. National Amateur championship for three straight years – 2009-2011. He went pro in 2012. Seven years later, he’s considered one of the top stars in boxing. As of October 2019, Errol has a record of 26-0-0 with 21 knockouts.

Wall of fame at fox ‼️

5. The boxer Errol just beat wished him a “quick and full” recovery. Errol’s last match was less than two weeks ago. He fought Shawn Porter on Sept. 28 and won via split decision. The fight unified two 147-pound world titles in a match that some are calling a contender for fight of the year. Though Shawn lost the match, he didn’t lose his civility and sent love to Errol in the wake of the crash. “My dad always tells me “this boxing thing is a part of your life but it’s not going to last forever. U still have a lot of life to live after that.” With that, I’m praying for @ErrolSpenceJr & his family because he has a lot of life to live and I pray he recovers quickly & fully.”