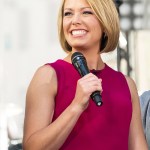 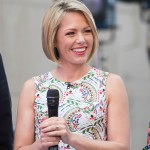 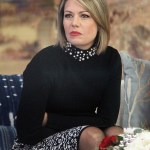 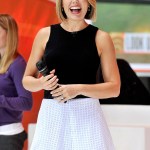 The ‘Today Show’s’ Dylan Dreyer bravely revealed her emotional infertility battle with thousands of people watching on television, & we’re sharing all you should know about her.

Dylan Dreyer, 37, is one brave lady. The well-known Today Show meteorologist shared the very personal news of her recent miscarriage and infertility struggle on April 22, via a segment on the morning show. In honor of national infertility awareness week, the weather anchor revealed she hopes to “shed the stigma” surrounding infertility by sharing her truth. Due to her emergency C-section with her first-born, she is now unable to conceive, and is turning to alternative methods. On the day that Dylan shared her emotional infertility battle with the world, here’s five things to know about her.

1.) She’s originally from New Jersey. Dylan was born in the city of Manalapan and went on to graduate from Rutgers University in 2003 with a bachelor’s degree in meteorology.

2.) Although she’s worked as a news host on some television shows, she initially became a meteorologist. She has gained her experience by working for various television stations, including WICU in Erie, PA, WJAR in Providence, RI, and WHDH in Boston, MA before heading over to Today. She also became the host of the NBC educational nature program Journey with Dylan Dreyer.

3.) Dreyer suffers from secondary infertility, which is defined as the inability to conceive or have a full-term pregnancy after having had children without difficulty. The meteorologist already shares one child with her husband, Brian Fichera, but after trying to conceive once again, she had a “very low egg count” and her uterus was “scarred shut” from delivering her first child, Calvin, 2. She admitted that five weeks into her most-recent pregnancy, she lost the baby.

4.) She hopes her story will inspire other women facing similar situations. “So many women are going through their own fertility issues, and I want to open up the conversation to get us all talking instead of sneaking onto that baby chat room and scrolling endlessly through the comments hoping to stumble upon someone going through a similar situation as us. Well, here I am, putting myself out there, and maybe it will give just one other woman the motivation to keep plugging along,” Dylan said on the Today Show.

5.) She’s covered numerous big events throughout her time on NBC. Her impressive resume includes coverage of the 2018 Winter Olympics in South Korea and Hurricane Gonzalo in Bermuda in 2014. In an interview with SJ Mag, she admitted that covering the hurricane was one of the scariest times of her career. “I was in my hotel room alone, and the curtains were blowing because the windows were bowing so much from the wind,” she said. “I thought for sure the glass was going to break. It was wind like I’ve never experienced before. I went into the bathroom, because I felt that was safer, crouched down between the toilet and the bathtub. I had no cell phone service and was just counting down the hours until the night would be over. I was scared and alone – I couldn’t talk to anyone – and I had no idea what was going to happen. Fortunately, the whole island of Bermuda was fine.”