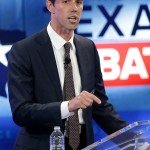 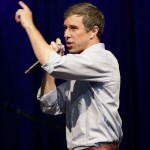 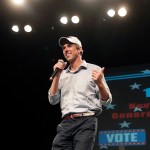 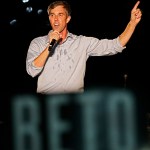 Beto O’Rourke is the name on everyone’s lips after he announced that he too is running as a Democrat in the 2020 presidential race! Find out why he’s running, and what he’s aiming to bring to the White House.

UPDATE (11/01/19 5:50pm EST): Beto O’Rourke has dropped out of the race for the Democratic candidacy in the 2020 presidential race. The former Texas representative tweeted, “I am announcing that my service to the country will not be as a candidate or as the nominee.” He had issues with fundraising and his campaign never found traction among the crowded field of candidates. O’Rourke continued, “We will work to ensure that the Democratic nominee is successful in defeating Donald Trump in 2020. I can tell you firsthand from having the chance to know the candidates, we will be well served by any one of them, and I’m going to be proud to support whoever she or he is.”

ORIGINAL: He’s running! Beto O’Rourke, 46, just became the 16th Democrat to announce their candidacy for the 2020 presidential race, and he may have a serious shot at winning. The young congressman rose to fame during the 2018 midterm elections, and his star power hasn’t dimmed since. If elected, O’Rourke would become the first person to lose a senate race and gain the presidency since Abraham Lincoln in 1861.

1. He announced that he’s running for president on March 14. Speculation that O’Rourke would run in 2020 has gone on for months, but the former congressman officially announced his intent to vie for the presidency on March 14. The young politician posted a video in the early hours starring himself and his wife, Amy Sanders, captioned, “I am running to serve you as the next president. The challenges we face are the greatest in living memory. No one person can meet them on their own. Only this country can do that, and only if we build a movement that includes all of us.” You can watch his full announcement below.

2. He’s a former congressman from Texas. O’Rourke represented Texas’ 16th congressional district in the House of Representatives for three terms, 2013 to 2017. He resigned after the third term, saying that he believed in term limits. This was also when he launched his bid for senate.

3. He ran against Ted Cruz for senator in the 2018 midterms. Will O’Rourke harness the energy and support he had during the midterms? O’Rourke rose to nationwide fame in 2018 when he ran against incumbent senator/Zodiac Killer Ted Cruz for his seat. Though he lost the election, he electrified a country hoping to turn conservative Texas from red to blue. He got massive celebrity support, including from Oprah Winfrey, LeBron James, and Houston native Beyonce.

I am running to serve you as the next president. The challenges we face are the greatest in living memory. No one person can meet them on their own. Only this country can do that, and only if we build a movement that includes all of us. Say you're in: https://t.co/EKLdkVET2u pic.twitter.com/lainXyvG2n

4. He’s running on a platform of fixing the economy and combatting climate change. O’Rourke stressed that he’s seeking a middle ground between the GOP and Democrats, but his politics are firmly liberal. He’s for legalizing marijuana. As an El Paso city rep, he was one of the earliest voices in the state to urge Congress to legalize weed, with the drug war in Mexico happening just miles away across the border.

He’s also for combatting climate change. O’Rourke, who has two young children, said in his first campaign stop on March 14 that, “the challenges before us are the greatest of our lifetime. The United States will be a democracy in name only unless we get it back. We need to do everything humanly possible in the next 10 years,” he said, to create a safe world for today’s children. “I could care less [about] your party persuasion, your religion. We must do everything in our power to help the next generation.”

He also wants to re-join the Paris Climate Accords, increase aid to public schools in low-income areas, insure healthcare for all Americans, provide a path to citizenship for immigrant kids, and reform ICE.

5. He’s a former punk band singer and skateboarder. So he’s cool AF. We all thought Barack Obama was awesome, but O’Rourke is next level, which could help him get support from the first batch of Gen Z kids able to vote. He’s the former guitarist for an El Paso punk band called Foss, and is still an avid skateboarder. A viral video during the midterms showed him skating through a Whataburger parking lot, and he even skateboarded onstage during a campaign stop. He’s known to drop an f-bomb or two, as well.