Fans of goth, punk, new wave, rock, and electro were united in sadness on Thursday after Depeche Mode announced that one of its founding members, keyboardist Andy Fletcher, had died. “We are shocked and filled with overwhelming sadness with the untimely passing of our dear friend, family member, and bandmate Andy ‘Fletch’ Fletcher,” the group said in a statement posted to its social media accounts. “Fletch had a true heart of gold and was always there when you needed support, a lively conversation, a good laugh, or a cold pint.”

“Our hearts are with his family, and we ask that you keep them in your thoughts and respect their privacy at this difficult time,” the statement added. No cause of death or any additional details were given. The sudden loss of such an influential musician sent ripples of sadness online. Here’s what you need to know about him.

Andy Fletcher Was A Founding Member Of Depeche Mode

Born in 1961 in Nottingham, Andy moved to Basildon, where he linked up with his fellow schoolmates Vince Clarke and Martin Gore to form the band Composition of Sound. With the addition of singer Dave Gahan, the band rebranded itself as Depeche Mode. Clarke left the group following the release of the band’s 1981 debut album, Speak & Spell, replaced by Alan Wilder, who would leave the group in 1995.

Depeche Mode would be one of the bands that helped soundtrack the 1980s and ’90s, with hits like “Just Can’t Get Enough,” “See You,” “Personal Jesus,” “Enjoy The Silence,” “People Are People,” “and much more. While commercially more successful in their native England, Depeche Mode was one of the bands beloved by goths and new wavers during the mid to late 80s.

“Within the band, I contribute the element of pop,” Andy told Electronic Beats in 2009. “Martin L. Gore, who writes most of the songs, loves American blues and country. And Dave has discovered jazz for himself. I, however, will probably eternally feel loyal to the simple pop melodies and the lightness they stand for. My kids also like pop.”

Related: Trouble: 5 Things To Know About Atlanta Rapper Dead At 34

Depeche Mode was announced as part of the Rock & Roll Hall’s Fame Class of 2020. Though COVID prevented the band from traveling to Cleveland to accept the honor in person, they still managed a way to express their gratitude.

He Was Happy To Be Out Of The Spotlight

Fletcher was the only member of Depeche Mode without a songwriting credit, per Consequence, and he didn’t sing in concert. He famously joked in 1989, “Martin’s the songwriter, Alan’s the good musician, Dave’s the vocalist, and I bum around.” However, Fletcher later explained that his role was more complex than that.

“The tall guy in the background, without whom this international corporation called Depeche Mode would never work,” he told Electronic Beats. “There is this big misunderstanding that in guitar bands, real men are working real instruments—evening after evening—while in a synthesizer band like Depeche Mode, nobody works, because it’s all machines. But that’s bullshit.”

“I was very much involved in the management during the first half of our career,” Andy said when speaking with the Bohemian in 2009. “We didn’t have a manager at that point, so that was the thing that I was quite interested in. But, like I said, I’m not the person in between the warring factions at the moment. I’m in the back, because there is no warring factions…touch wood…touching the desk here…and the atmosphere in the band is good, you know. I like being in the background. I think you can’t have a band when every single person in the band is going for the limelight.”

He Was A DJ

Depeche Mode never broke up, but there were times when band members did their own thing. Both Dave and Martin worked on solo projects. For Andy, he became a successful DJ. 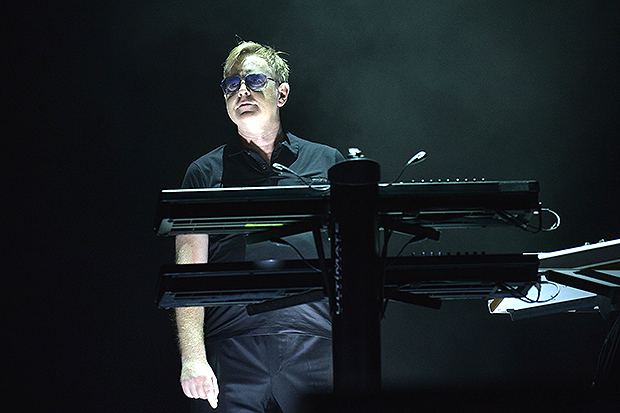 “I use about 50% vinyl, 50% CDs at the moment,” he told Bohemian. “I don’t know what I’m going to do next, maybe a bit more computerized, I don’t know. But it’s been a normal setup. I try and play sort of a lot of music that I feel is suited around Depeche Mode, but I really play anything. I enjoy it, and I tend to go to places that Depeche Mode doesn’t go much, like Bucharest and places like that.”

He Is Survived By His Wife & Kids

Andy married his longtime girlfriend, Gráinne Mullan, in the early 1990s. The two welcomed two children together, a daughter named Megan and a son named Joe.