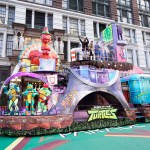 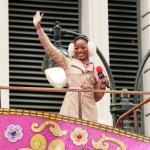 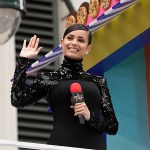 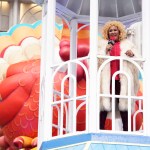 South Korean girl group Aespa will be among the star-studded performers at this year’s Macy’s Thanksgiving Day Parade in NYC. Here’s what you need to know about Aespa.

The 2021 Macy’s Thanksgiving Day Parade on Nov. 25 will have a special K-Pop performance — but it won’t be featuring BTS. Aespa, an all-female South Korean group that formed last year, will be delivering an epic performance at the annual event in New York City. K-Pop fans are obviously very familiar with the award-winning BTS, but Aespa is starting to really make it big in the music industry. Below, everything you need to know about Aespa, before their big Thanksgiving Day performance.

Four talented women make up Aespa. First, you have Winter, 20, the Korean lead vocalist and lead dancer. Karina, 21, is considered the leader of the group, and she’s also a vocalist, dancer, and rapper. Giselle, 21, is from Japan and is the main rapper of the group. Finally, you have Ningning, 19, who is from China and is the youngest member of Aespa. They were formed by SM Entertainment.

2. The group’s name has significant meaning.

When Aespa was formed, some thought went into the group’s moniker. The name Aespa combines the English initials of “avatar,” and “experience,” as well as the word “aspect,” in order to symbolize the idea of “meeting another self and experiencing the new world,” according to reports.

3. ‘Black Mamba’ was their first single.

Aespa put themselves on the map when they released their debut single “Black Mamba” on November 17, 2020. The song was written and composed by South Korean musician Yoo Young-jin. A nearly 4-minute-long music video was released alongside the song, and as of the time of publishing, it has over 190 million views on YouTube. “Black Mamba” was a huge hit for Aespa: the song peaked on the charts at number 49 in South Korea, and at number 5 on the U.S. Billboard World Digital Songs. Since then, they’ve released several more singles and dropped their first extended play, Savage, on October 5, 2021.

It’s only been a year since Aespa formed, and the group has already been honored with an array of award nominations and wins. They won Best New Artist at the Asian Pop Music Awards last year, and were also nominated for two Asia Artist Awards. In 2021, they won at the Gain Chart Music Awards and recently won one award at the MTV Europe Music Awards, and another at the Seoul Music Awards. Aespa is up for more awards at coming shows, and it’s likely that their recognitions will only continue as time goes on!

5. Aespa was accused of plagiarism.

Aespa has been so successful already, but they have found themselves in a bit of controversy. Last year, the group was accused of plagiarizing German artist Timo Helgert‘s work due to its similarities to their teaser video for “Black Mamba.” Timo later addressed this on his Instagram Stories, according to Elle. He wrote, “I received many messages. They didn’t ask me and I didn’t work on it. Seems like they have copied it.” However, Aespa and Timo reportedly settled the controversy, which Timo confirmed himself in a statement.