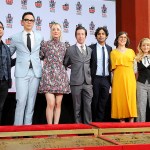 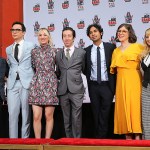 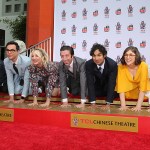 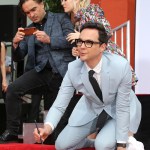 ‘The Big Bang Theory’ is coming to an end after 12 seasons, but its impact will live on! The cast was honored with a handprint ceremony at TCL Chinese Theatre in Hollywood after filming the last episode.

Just weeks before the final episode of The Big Bang Theory is set to air, the cast of the long-running sitcom was honored with a handprint ceremony at the TCL Chinese Theatre in Hollywood. The show’s stars, Johnny Galecki, Jim Parsons, Kaley Cuoco, Simon Helberg, Kunal Nayyar, Mayim Bialik, and Melissa Rauch, were all selected for the prestigious honor of getting their handprints encased in cement in front of the legendary Los Angeles theater. The entire cast looked incredible for the May 1 event, showing up the day after filming the last episode of the 12-season series not looking like they’d been crying at all!

The guys looked so dapper for the event. Jim, who has won four Emmys and a Golden Globe for playing Sheldon Cooper, rocked a pale blue suit and thick, black glasses. The women really turned out. Kaley looked beautiful in a flirty, floral minidress with poufy sleeves. Nude heels really made her legs look incredible! We’re really impressed by how put together Kaley looks, considering that she showed fans she was sobbing during their last table read. Her script was covered in tissues, poor thing.  Mayim stunned in sunny yellow at the theater, and Melissa was a winner in a cute suit: pinstripe pants, a black vest, and a little bolero tie.

The cast being selected to leave their handprints was actually extra special; The Big Bang Theory is the first television series to ever be honored with the ceremony. While the Star Trek cast did get their handprints done for its 25th anniversary, they were also being honored for the series’ six films. We’re sure The Big Bang Theory guys would be proud to know they were in such good company. When the shows signs off for the last time on May 16, it will go out as the longest-running multi-camera series in television history. It’s been a crazy 12 years!