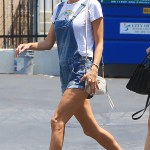 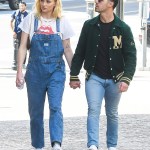 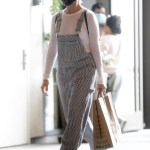 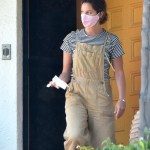 Overalls are finally getting the love they deserve! The cute denim look has been revived from the 90s thanks to celebrities like Sophie Turner & Selena Gomez who have adopted the jumpsuit.

Just in time for summer, overalls are officially back in style. Sophie Turner rocked the casual look when she was out in LA on Feb. 28. The actress rocked a pair of dark wash Levi’s Overalls in Dead Stone with a baggy vintage Daydreamer Rolling Stones 89 Tour Crop top underneath. She accessorized her look with a pair of Adidas Gazelle Sneakers and a Louis Vuitton Mini Accessories Pochette Bag.

Selena Gomez proved the trend is back when she headed to brunch with friends during Memorial Day Weekend on Sunday, May 26, in a cool black one-piece. Selena channeled a ’90s Jennifer Aniston on the set of her movie, Picture Perfect, when Sel opted to wear a black linen overall jumpsuit with a halter neck, rocking a white short-sleeve T-shirt underneath. The overalls were cinched in at her waist, flowing into wide-leg cropped culottes, which were loose against her toned legs. The best part of Selena’s look was by far her accessories. She topped her look off with a pair of white Puma Cali Sneakers, tiny round Oliver Peoples Calidor Sunglasses, a backwards black baseball cap, and two adorable braided pigtails. Sels absolutely slayed this look and proved that there are so many different ways to style overalls for summer.

Another one of our fave stars, Miley Cyrus stepped out for dinner in Malibu on April 7, when opted to wear a full Chanel ensemble starring overalls. She rocked the dark wash one-piece, which featured a tight bodice and fitted legs, which she decided to cuff, showing off her black slide sandals. She paired the look with a white short-sleeve, t-shirt underneath, layering chunky gold necklaces around her neck, and threw on a beige cardigan with a black Chanel logo across it, on top of the whole look. Aside from Miley’s chic outfit, Carrie Underwood also rocked a pair recently. The country crooner was in Las Vegas for the 54th ACM Awards when she chose to wear baggy light wash Levi’s Vintage Short Overalls. The shorts were super baggy, highlighting her long, lean legs, which she paired with light pink slip-on sneakers. Underneath the one-piece, she chose to throw on a white vintage graphic crewneck sweatshirt, making this look comfortable, yet stylish.

Overalls were a wardrobe staple in the ’90s, and like all good trends from that beloved decade, they’ve found their way back into Urban Outfitters everywhere. Rocking what is essentially a denim jumpsuit might not sound like the sexiest outfit you can rock, but it definitely can be adapted to have a bit more sex appeal.

Lili Reinhart proved that overalls could be sexy when the Riverdale star donned a white wide leg version of the look that featured a zipper down the front. Thanks to said zipper, the actress showed a bit of her cleavage by unzipping the overalls a bit. She even posted a photo of herself wearing overalls from a shoot with our sister site Variety, which was appropriately captioned, “Where’s the disco, baby.” Yeah, her look is definitely more ’70s than ’90s, which just proves once again how versatile this piece can be!

Taylor Swift is basically a pro at making overalls look cute by now. The ‘Delicate’ hitmaker stepped out in August 2016 wearing the clasped garment as a dress, which was made by Tularosa. She wore it over a pink spaghetti strap top and paired it with Gucci sneakers. The year prior, Taylor also wore long overalls, but opted for a black distressed denim pair which she wore over a white crop top.

Alessandra Ambrosio also beat the heat this summer by rocking a pair of cutoff overalls while running errands in Santa Monica on July 25. She kept her look fun and casual by pairing it with a white t-shirt with a rainbow printed on the font. The Victoria’s Secret model rounded out the outfit with beige flip flops, sunglasses, and a small white purse. Clearly, there are tons of ways to make overalls look good, so we gathered some of our favorite celeb takes on the trend. Check the pics out in the gallery above!