It’s time to celebrate! Halle Berry turns 53 today, but she looks half that. In honor of her big day, look back at all the amazing looks Halle turned out while on the red carpet.

It’s time to have one monster of a ball. Halle Berry turns 53 on August 14, 2019. So, race the sun, so you have enough time to get with the program. Make the executive decision to party down. (We would have worked in a Catwoman reference there if we could have, but the less said about that movie, the better.) Over twenty years, the Academy Award-winning actress has appeared in some memorable films like Bulworth, Cloud Atlas, and John Wick: Chapter 3. To celebrate her milestone birthday, let’s look at some of the hottest looks Halle has rocked while on the red carpet.

Halle’s sheer dress at the 2017 Academy Awards was almost overshadowed by her amazing hair that year. Her curls were practically as outrageous as her curves in the dress. Her outfit at the Oscars was as glamorous as the outfit she wore to that year’s Met Gala. In celebration of Rei Kawakubo’s line, Comme des Garcons, Halle wore this cascading dress that made it looks as if she was made of gold and black flowers. Halle also proved that she can keep it simple and sleep when attending the Los Angeles premiere of 2019’s John Wick: Chapter 3. She rocked a sleek leather romper with nothing underneath. She had legs for days and used them to walk every inch of the red (black?) carpet like a queen.

Halle’s glamor was celebrated in InStyle’s 25th Anniversary issue. She credited her pixie cut for helping her break into the acting biz. “I think that was because the directors and producers actually saw me,” she said when speaking to the publication. “Before that, I had long hair like every other girl like me. And I dared to cut it short, and that got me my first job on [the 1989 sitcom] Living Dolls. When I got this [short] haircut, I felt like my best self.” 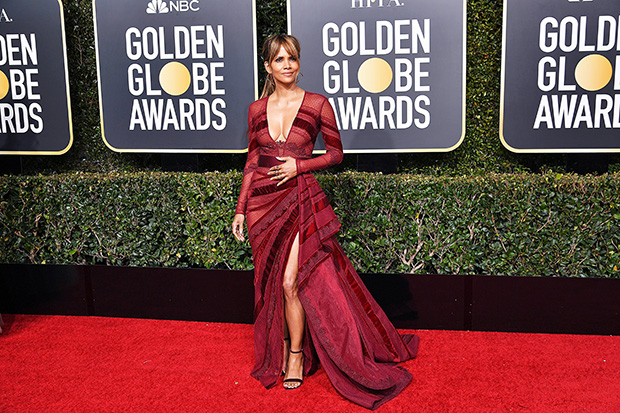 She also revealed when she felt the sexiest, and it wasn’t when she was in a dress worth thousands of dollars. “Honestly, I felt the sexiest during both my pregnancies,” she told the magazine. “Around the time of my third InStyle cover, in 2007, I became a mom at 40. Knowing that someone would always be counting on me made me a better person. I’m more focused and in line with my values and my goals. I stopped letting negativity get me down. Plus, I loved being pregnant. Had I started earlier, I probably would have had five children.” She gave birth to daughter Hala in 2008 and son, Maceo, in 2013.

“Or if I hadn’t been busy trying to make movies, I would have been the perfect surrogate. All the hormones made me feel amazing. I was so alive with my purpose and my femininity. It felt like my body was doing what it was built to do,” she added.