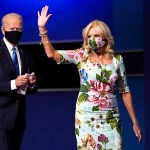 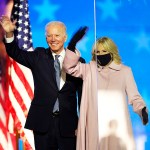 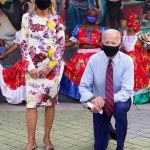 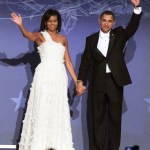 Dr. Jill Biden becomes first lady today, Jan. 20. And with that, she joins a league of fashionable FLOTUSes like Michelle Obama and Jackie Kennedy. See their most stunning outfits of all time.

Their influence in the White House rivals their husbands. And while they’re in office, first ladies take the opportunity to wear remarkable fashion with the world as their stage. Whether it’s glorious gowns (Michelle Obama), smart suits (Hillary Clinton), or pretty pumps (Jacqueline Kennedy), each FLOTUS has had their signature look. Now, Dr. Jill Biden joins their ranks.

There’s a reason she was called “The First Lady of Fashion.” Whatever she wears, Michelle kills it. During her eight years in the White House and in the years since, “Miche,” as husband Barack Obama calls her, changed up her style several times. Whether it’s athleisure, sleek leather looks, or subdued sheath dresses, her outfits were (and are) almost all winners. Just look at this red gown she wore to her husband’s second inauguration!

The nation let out a collective gasp when Michelle arrived at the inaugural ball following Barack’s 2013 swearing-in ceremony in a ruby red chiffon gown with velvet detailing and a halter neck. She paired the Jason Wu creation with sparkly bangles and those bangs. President Obama joked at the time that Michelle’s new hairdo was “the most significant event of his second inauguration.”

Dr. Biden isn’t known for her fashion prowess, but she’s never seen without a stylish outfit. The former second lady — now incoming first lady — loves a coordinating skirt suit or figure-hugging dress fit for the office. Jill turned heads at the October 23, 2020 presidential debate when she arrived in a floral Dolce & Gabbana dress to support her husband. She light blue cocktail dress with nude Jimmy Choo pumps and pearls. But what got people talking was her protective face mask. It was made out of the same fabric as her D&G outfit. How chic is that?

To see more first lady fashions from Michelle Obama, Hillary Clinton, Dr. Jill Biden, and the iconic, late Jacqueline Kennedy, scroll through our gallery above. The history of high fashion in the East Wing is unparalleled in this country.