The return of Emily In Paris is right around the corner. The hit Netflix series will debut its third season right before Christmas on December 21. The romantic comedy series became a sensation when the first season dropped on Netflix in October 2020. Emily In Paris became the perfect pandemic binge — now season 3 will be the ultimate holiday binge.

The first season 3 trailer was released by Netflix on November 30. Emily continues to have “existential angst” about her career and romantic life as she lives this monumental chapter in Paris. As expected, Emily’s fashion game is next level in the third season. Fans didn’t have to wait long for the arrival of season 3. Emily In Paris season 2 was released in December 2021, and Netflix quickly gave Emily In Paris the greenlight for season 3. HollywoodLife has everything you need to know about Emily In Paris season 3.

Emily In Paris: Recap Of Season 1

The series kicked off with Emily Cooper landing her dream job in Paris. She was selected to represent her marketing company overseas and live in Paris since her boss was pregnant at the time. At first, Emily tried to make a long-distance relationship with her Chicago-based boyfriend work, but they quickly broke up after her move.

Emily met new friends once she began to settle down in Paris. She became close to Mindy, Camille, and the handsome chef Gabriel. It didn’t take long for Emily to develop feelings for Gabriel as their friendship evolved. Just before Gabriel was set to move to Normandy to open a restaurant, they hooked up.

Gabriel didn’t move to Normandy and stayed in Paris to launch his own restaurant. Emily soon realized she didn’t want to derail her friendship with Camille, who was in an on-again-off-again relationship with Gabriel herself, so Emily put a stop to anything romantic with Gabriel. Season 1 ended with Camille texting Emily about Gabriel staying in Paris and asking to talk. Emily was immediately worried that Camille had found out about her tryst with Gabriel. (Spoiler alert: Camille found out in season 2.)

Emily In Paris: Recap of Season 2

The official synopsis of season 2 was: “Now more entrenched in her life in Paris, Emily’s getting better at navigating the city but still struggling with the idiosyncrasies of French life. After stumbling into a love triangle with her neighbor and her first real French friend, Emily is determined to focus on her work — which is getting more complicated by the day. In French class, she meets a fellow expat who both infuriates and intrigues her.” 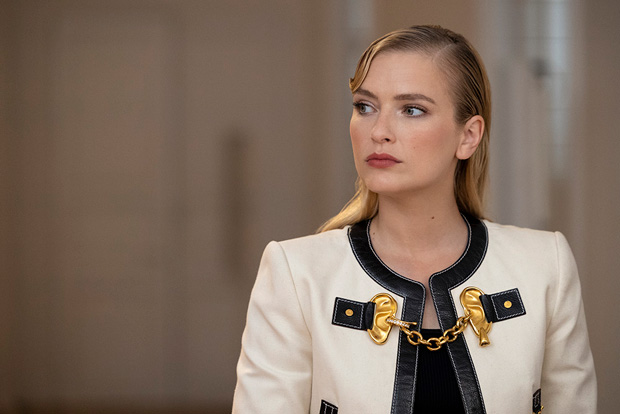 Season 2 picked up right where the first season left off. Emily stayed in Paris and made the decision that she couldn’t date Gabriel because of his relationship with Camille. However, Camille found out they had sex and became furious with Emily. Since she was officially single again, Emily began dating Alfie, a businessman in her French class.

When it came to her work with Savoir, there was just as much drama for Emily. Madeline traveled to Paris and was at odds with pretty much everyone. Pierre left the firm, followed by Sylvie at the end of the season. Sylvie decided to open up her own agency. This left Emily torn over whether to stay with Savoir or join Sylvie at her new firm.

Despite her new romance with the dashing Alfie, Emily’s feelings for Gabriel remained. Alfie had to return to London but told Emily he wanted to make a long-distance relationship work. Emily confessed to Mindy that she was still in love with Gabriel, even after she reconciled with Camille.

In the season 2 finale, Emily went to Gabriel’s place to tell him that she was in love with him but discovered that he had gotten back together with Camille. Emily broke down in tears after walking away. The season ended with Emily calling Sylvie about her future. “I’ve made my decision,” she said.

The ending left fans wondering about Emily’s decision, which will likely remain a mystery until a trailer is released. However, we have a feeling we know what Emily has decided. After all, she’s still going to be in Paris!

Release Date: When Will Emily In Paris Season 3 Be Released

The Emily In Paris season 3 release date is December 21, 2022. All 10 episodes of season 3 will be available to binge that day. Season 3 was officially announced in January 2022 when Netflix renewed the series for seasons 3 and 4. “Say ‘bonjour’ to 3 & 4! EMILY IS OFFICIALLY RETURNING FOR TWO MORE SEASONS!” the caption on the Emily In Paris Instagram page read.

Lily Collins celebrated the 2-season renewal with a heartfelt Instagram post of her own. “Woke up early to give you some VERY exciting news… @emilyinparis is back for Season 3… AND wait for it, Season 4!!!!! I can’t tell if Emily would love or hate this announcement outfit but she’d be screaming either way. Truly love you all, thanks so much for the incredible support. Seriously cannot wait for more. Merci Beaucoup!!…” she wrote.

Production got underway for season 3 in June 2022. Netflix released a photo of the first script of season 3 at the table read, as well as a photo of Lily and Ashley Park in Paris. “Back at a table together, and it’s not for a client meeting or a dinner party. production on season 3 is starting now!” the caption read.

Despite no release date yet, Emily In Paris season 3 will likely drop in early 2023. Filming will take a few months. Netflix also hasn’t noted whether or not seasons 3 and 4 will be filmed back-to-back.

Where Can I Watch Previous Seasons Of Emily In Paris?

The first two seasons of Emily In Paris are currently available to stream globally on Netflix. The show is exclusive to Netflix, so Emily In Paris is not available to watch on any other streaming service or cable channel. All you need to binge the first 20 episodes is a subscription to Netflix!

What Do We Know About What Will Happen Next Season?

The season 3 trailer gave us a glimpse at what to expect in the upcoming third season. Emily will be pulling “double duty” between working for Madeline and Sylvie, but her two lives will inevitably catch up to her. Emily and Alfie appear to be going strong in season 3, but her magnetic pull toward Gabriel cannot be ignored. “This is the hardest decision I’ve ever had to make,” Emily says in the trailer, though it’s not clear whether she’s talking about her career or love life.

The official synopsis for season 3 reads: “One year after moving from Chicago to Paris for her dream job, Emily finds herself at a crucial crossroads in every aspect of her life. Faced with two very different paths, Emily will have to decide exactly where her loyalties lie — at work and in her romantic life — and what those decisions mean for her future in France, all while continuing to immerse herself in the adventures and surprising twists and turns that life in Paris provides.”

“She’s faced with a major decision. She has reasons to pick a number of doors at the end of season 2, and our challenge is deciding which of those doors she’s going to choose and why,” creator Darren Star told TVLine. “That’s what season 3 is going to be about. When you live in a foreign country, one of the questions is, where’s your heart? Is it the place you came from, or the place you are at the moment? Emily is going to be struggling with that as well.”

Emily’s decision about her career’s future will be “really intertwined” with her personal life and Gabriel “because it’s her life, and she does have very strong feelings for Gabriel.” Darren added, “That’s a question she’s going to have to confront is, how can she manage her relationship issues with her work issues, both of which, by the end of season 2, are hanging in the balance.”

Before season 3 started filming, Lily didn’t even know the details of Emily’s decision. “I think there’s pros and cons to each,” the actress told Elle. “I think Emily is blown away that Sylvie would want her to come with her. And then at the same time, she now has found this relationship with Alfie and…maybe she’d love to go to London. It’s only a Eurostar train ride away. So I don’t know. I think that there would be fun in both of those elements at the same time. Is there a world where there could be both? You don’t know. I think in the world of Emily, anything is possible.”

Even though he was heading back to London, you’ll be seeing Alfie again in season 3. “I wouldn’t write Alfie off, and I don’t think Emily should, either,” Darren admitted to TVLine. “London’s not far from Paris.” Plus, it was revealed in April 2022 that Lucien Laviscount, a.k.a. Alfie, will be a series regular in season 3.

Netflix hasn’t revealed how many episodes season 3 will be just yet. If season 3 follows the prior seasons, it will consist of 10 episodes.

Everything We Know About Season 3

Emily In Paris season 3’s production is happening now, and we’ve already seen Lily and Ashley reunited in Paris. Get ready for more BFF moments between Emily and Mindy.

Cast members who are also expected to return in season 3 include Philippine Leroy-Beaulieu as Sylvie, Lucas Bravo as Gabriel, Samuel Arnold as Julien, Bruno Gouery as Luc, Camille Razat as Camille, William Abadie as Antoine, Lucien Laviscount as Alfie, and Kate Walsh as Madeline Wheeler.

The Gabriel-Emily-Alfie love triangle will be in full swing in season 3. However, Lucas Bravo is actually Team Alfie when it comes to who should win Emily’s heart. “I think it makes sense,” Lucas told HollywoodLife EXCLUSIVELY. “I think this is a show that is a love letter to Paris, and it is a perfect Paris postcard. And having an antagonist point of view through the medium of Alfie is refreshing. Not everything is rainbows and butterflies. You need a little bit of darkness to enjoy the light, and that is what Alfie brings to the occasion and I like that. I think he is the perfect match for Lily [Collins], because she is all about Paris, and I like the conflict of all of that.”

Camille defended her character breaking the pinky promise Camille and Emily made about not getting back together with Gabriel. “For sure, I mean she wants her man back. That is her man, first of all,” Camille told HollywoodLife EXCLUSIVELY. “I don’t think she planned it for a long time,” the actress continued. “I just think when she is at the restaurant and makes the promise, then right now she knows, because her mother tells her to do that. You remember she was like, ‘I am going to help you, but you are going to have to do exactly what I say.’”

Kate also teased to HollywoodLife EXCLUSIVELY that she will be back in a major way in season 3. She promised that the third season will “bigger and better” than ever before. “There are some major surprises that no one will ever expect. When you see what happens in season 3, it’s really good, particularly between Madeline and Sylvie,” she said.

'Emily In Paris': Photos Of Lily Collins On Set & More