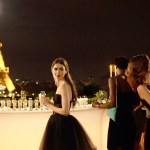 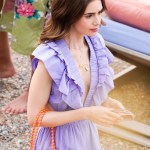 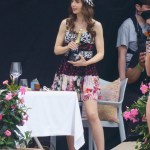 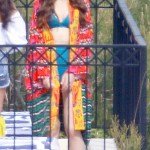 Bonjour! ‘Emily In Paris’ is returning for season 2. Lily Collins is hard at work and has been spotted filming her first scenes of season 2. From filming scoop to what season 2 will be about, here are the latest updates.

Emily In Paris was one of the quarantine hits of 2020. The Netflix series became a major hit for the streaming service after it debuted on October 2, 2020. The show follows Emily, an ambitious and fashionable twenty-something marketing executive from Chicago, who lands her dream job in Paris. She heads to The City of Love to work for Savoir, a French luxury marketing company. Along the way, Emily experiences all that Paris has to offer, including romance. Ooh, la la!

Less than a month after season 1 was released, Netflix ordered Emily In Paris season 2. Since then, there have been a number of updates about season 2. Lily Collins was seen filming scenes for season 2 on May 3, 2021, the first official day of production. From more of Lily’s season 2 looks to filming news, here’s what we know so far:

The Emily In Paris cast announced they had started filming season 2 in a May 3 Instagram video. Lily revealed the exciting news alongside her co-stars Ashley Park, Lucas Bravo, William Abadie, Samuel Arnold, Leroy-Beaulieu, Bruno Gouery, and Camille Razat. The Instagram video hinted that season 2 filming locations would extend beyond Paris. “Bonjour from Paris (and maybe some other areas of France). We’re officially back in production on Season 2!” the caption read.

Lily was spotted filming season 2 scenes in Villefranche-sur-Mer, a fishing village on the French Riviera, on May 3 and May 4. Emily will be sporting some new memorable outfits in season 2. Lily filmed a swimming pool scene where she donned a blue bikini and a colorful cover-up on May 3. She was also seen wearing a floral and polka dot dress with a black and white spotted hat for another scene, as well as a gorgeous purple dress on May 4.

Emily In Paris season 2 does not have a release date yet. Since filming started in May 2021, production will last a few months in France. Unfortunately, it’ll likely be 2022 before the new season is released on Netflix.

Emily in Paris will return for Season 2! pic.twitter.com/QDOzpzjliz

The streaming service made the season 2 announcement in the form of a video from the cast and a “letter” from Sylvie in Nov. 2020. In the letter, Sylvie is requesting that Emily’s old boss, Madeline Wheeler, extend Emily’s time in Paris.

“Despite her overconfident manner and lack of prior experience in luxury good marketing, she has nonetheless managed to charm some of our hard-to-impress clients,” Sylvie writes. “We hope that by extending her time in Paris, Emily will further the relationships she has already made, delve deeper into our culture, and perhaps pick up a few words of basic French.” Sylvie’s right. Emily has to work on her French.

How To Watch ‘Emily In Paris’ Season 2

Emily In Paris season 2 will be available on Netflix. The series is not available on any other streaming platforms. Emily In Paris was Netflix’s most popular comedy series of 2020. The series was viewed by 58 million households in just the first 28 days of its October 2 launch. The first season consisted of 10 episodes, so season 2 will likely have the same number of episodes.

You can expect to see all of your faves returning in the second season. In addition to Lily, cast members expected to return include Ashley Park as Mindy Chen, Lucas Bravo as Gabriel, Camille Razat as Camille, William Abadie as Antoine Lambert, Samuel Arnold as Julien, Bruno Gouery as Luc, and Philippine Leroy-Beaulieu as Sylvie Grateau. As with any new season, you will likely see new characters introduced. Netflix has not announced the casting of any new cast members yet. Oh, and Paris is returning. It’s the main character of the show. Duh.

What Will Season 2 Be About?

Last season ended with Emily and Gabriel spending the night together after he ends things with Camille. He’s supposed to leave for Normandy to start his own restaurant, but he ends up sticking around at his bistro in Paris. The final moments of the season 1 finale feature Camille texting Emily that she heard Gabriel is staying in Paris. “Can we talk?” she texts Emily. Emily has some explaining to do.

Creator Darren Star recently teased Emily’s “challenges” in season 2 and the “fallout” of that season 1 cliffhanger. “Emily will embrace the city a little bit more,” Darren told Variety. “When she got there, she got a bit of a free pass in the beginning and I don’t think it will be quite as easy for her in the second season. I think she will be more assimilated, in terms of living in Paris and stepping up to the challenges of learning the language.”

Darren also hinted at “unexpected storylines” for Emily regarding her romantic life. “There was a twist a the end of the first season that she did not see coming, and I think there’s a lot of fallout that happens from that in the new season,” he said.

Lily admitted that Emily should go outside of France at some point. “At some point, I was joking with Darren and said, ‘Couldn’t they just, like, hop on the Eurostar and, like, have a British excursion?'” she told HarpersBAZAAR.com. “I think it could be Emily going to all these different places. It’s Emily in … and then insert the city. She could just take the train and go all over Europe, and Mindy and her could go together.”

The Golden Globe nominee told Deadline she was “excited to dive deeper into those backstories and spend more time intermingling the two groups of people that she meets” in season 2. “Now that we’ve seen her with all these ‘Parisisms,’ maybe we get to actually get to a bit more of her backstory, and experience that with some of the other characters.” She also wouldn’t say Gabriel was the guy for Emily. “I think she’s still exploring the prospects,” she said. “Honestly, I think Emily doesn’t even know [what will happen], and that’s the beauty of the way that they write the show. She has yet to find all the qualities she maybe is looking for. But that being said, there is that connection with Gabriel, but now she has Camille in that love triangle, so I think there’s still experiences to be had, adventure to be had and she’s still finding herself.”

Since Darren created both Emily In Paris and Sex and the City, Lily is putting a crossover out into the universe. “I feel like maybe that needs to happen,” Lily told Variety. “I might tell Darren about that. She could be like an apparition. Emily walks by, and there’s a reflection in a window, and she looks in, but she sees Carrie. Then it goes back and it’s her, and she’s like, ‘What?’ I think that’d be kind of great.” Carrie Bradshaw had quite the adventure in Paris at the end of Sex and the City’s run. It would be a fashion face-off between Emily and Carrie, that’s for sure.