Halle Berry, 56, is known for her super fit physique, but on November 10 she shared some throwback lingerie photos from 24 years ago and reminded everyone she doesn’t just work hard, she’s also genetically blessed. The revealing polaroids were taken back in 1998 while Halle was shooting the 1999 HBO biopic Introducing Dorothy Dandridge, a heartfelt tribute to the first Black woman to be nominated for a Best Actress Oscar. The biopic earned rave reviews and Halle took home the Golden Globe for her portrayal of the iconic singer-turned actress.

In her caption of the photos series, seen here, Halle explained the background of the polaroids and wrote: “This TBT I share with you what we affectionately called ‘The Dottie Body.’ Every piece of Dorothy Dandridge’s clothing given to me by her manager Earl Mills fit me perfectly! Here’s a look behind the curtain of my polaroid collection of costume fittings and shoot days! If you love Dottie like I do, enjoy!”

In the first photo in the series Halle is standing with her hands on her hips, wearing nothing but a gold bra and underwear set. On the bottom of the Polaroid “Dottie Body” is written in black marker. In another photo in the series she’s wearing a bright red lace bra and matching underwear, with her hands posed by her side. Other photos show her wearing period pieces from the 1940’s and early 1950’s, when Dorothy was at the height of her fame.

One day prior, on November 9, the X-Men actress posted a tribute to celebrate what would have been the 100th birthday of the iconic Hollywood star. In a series of photos, that can be seen here, Halle shared snaps of herself in full costume and make-up as Dorothy, along with a series of vintage pics of the star, and the resemblance is uncanny. In her caption Halle wrote: “23 years ago, I was privileged to bring the life of Dorothy Dandridge to the screen and 100 years ago today this legendary magical creature was born! Happy Birthday, Dottie.” 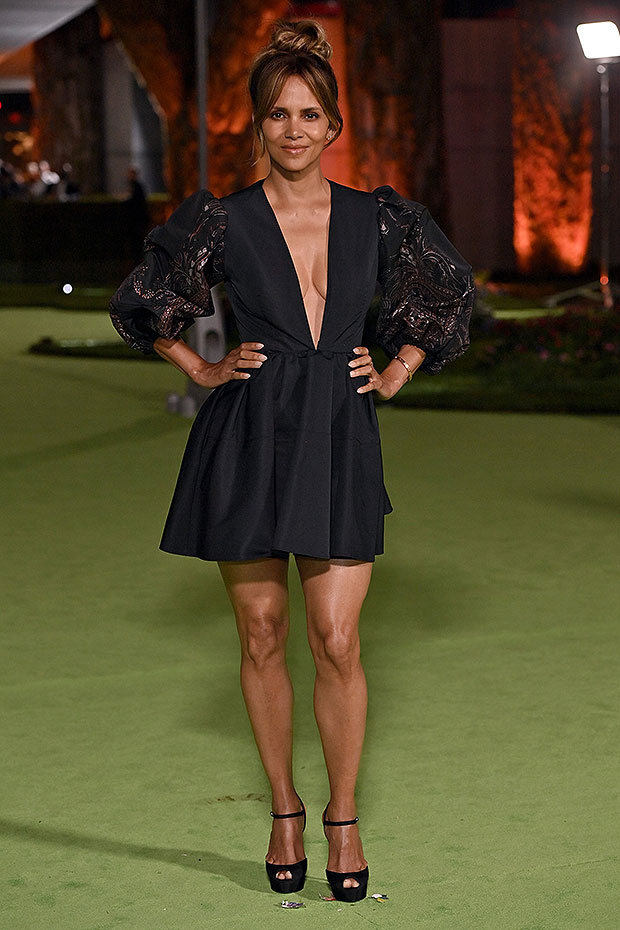 Born in 1922, in Cleveland Ohio, Dorothy began her career as a nightclub singer before breaking into Hollywood. She rose to fame thanks to hit songs ‘I’ve Grown Accustomed To Your Face’ and ‘That Old Feeling.’ Then in 1954 she was nominated for an Academy Award for her work in the musical Carmen Jones. Sadly, in 1965, at just 42-years-old, Dorothy passed away after an accidental overdose.

Although Dorothy was a contemporary of Marilyn Monroe and Ava Gardner, her legacy was largely overlooked in the years following her death — until Halle bought the rights to her life story and fought for six years to get a movie made. In 2021 Halle spoke about her longtime admiration for Dorothy in an interview with Marie Claire and revealed that the stunning actress was a “beauty icon” for her growing up.

Related: Halle Berry’s Husbands: Everything To Know About Her 3 Spouses & Current Relationship

“I struggled to find women who reflected me when I was growing up. Being a woman of color, I can’t say there were many around me,” Halle explained. “There was, of course, my mother. But she was a blue-eyed blonde. And while I looked up to her, I struggled to find images of women that looked like me. So I would have to say probably Dorothy Dandridge, Diahann Carroll and Diana Ross. They were my beauty icons, in my mind.”

In a 1999 interview with the Washington Post, Halle spoke in depth about her passion for making the Dorothy Dandridge biopic and said of the late star, “She walked through the back doors so that I can go through the front doors.” Halle’s illustrious Hollywood career is chock full of blockbusters and awards — including her own 2002 Best Actress Oscar for Monster’s Ball.