“So heartbreaking to say Denise Dowse has passed away,” Ian Ziering wrote on Aug. 13, shortly after Denise, 64, died after viral meningitis left comatose for days. Denise played vice-principal Mrs. Yvonne Teasley opposite Ian’s Steve Sanders on Beverly Hills, 90210, and the 58-year-old actor recalled how his “scenes with Denise will always be remembered with the utmost in respect for her talent, and fondness for the loving soul she was.

Ian shared a photo of Denise on the hit Fox drama along with his message. “Some of my heartiest off-camera laughs were between she and I hammering out the discipline her Mrs. Teasley would dish out to my Steve Sanders,” he wrote. “My sincere condolences to her family, and all others who she was dear to. God bless you Denise, pay forward that Legacy Key A.” Among those adding their condolences in the comments section was Ian’s 90210 costar, Brian Austin Green, who posted a pair of heart emojis. 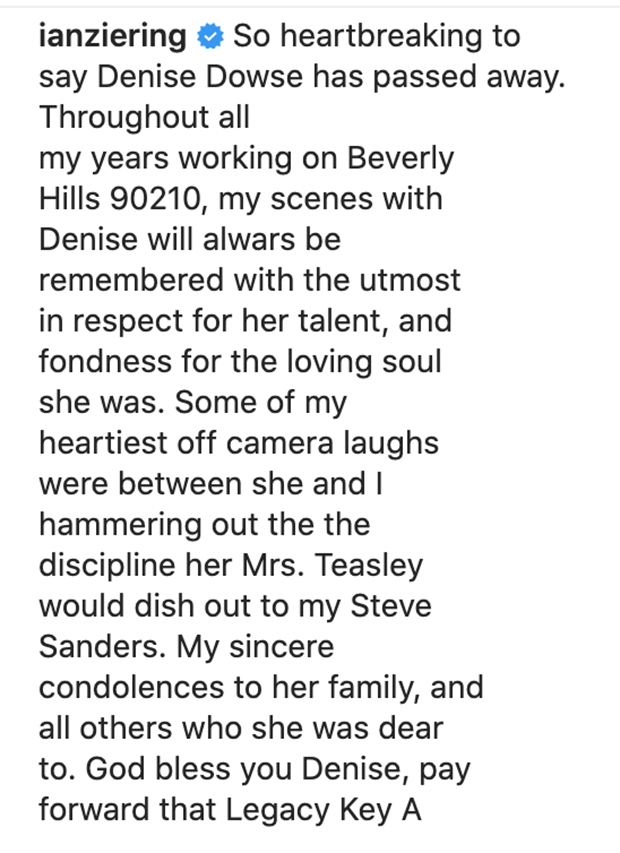 Denise’s passing was confirmed by a social media post made by her sister, Tracey. “It is with a very heavy heart that I inform everyone that my sister, Denise Dowse, has gone forward to meet our family in eternal life,” she wrote on Denise’s account. “Denise Yvonne Dowse was the most amazing sister, a consummate, illustrious actress, mentor, and director. She was my very best friend and final family member. Denise loved all of you. I know that she is watching over us with all the love she has. I ask for privacy and your continued prayers.”

“I will provide, at a later time, her Celebration of Life information,” her sister wrote. “I will update you here. Again I am so grateful for all the calls, text messages, direct messages, and silent prayers for my sister. We could not have made it so gracefully and painlessly without all of the prayer warriors around the world.”

Tracey wrote at the start of August that her sister was in a coma after contracting a virulent form of meningitis, which left her experiencing inflammation in the protective membranes that both surrounded her brain and spinal cord. “She is a vibrant actor and director that should have many years ahead of her. Thoughts, prayers, and support are greatly appreciated.”

In addition to 90210, Denise appeared in shows like Alf, Seinfeld, Murphy Brown, ER, House, The Bernie Mac Show, and Buffy the Vampire Slayer. She also had notable roles in movies like 1998’s Pleasantville, 2000’s Requiem for a Dream, and 2001’s Dr. Dolittle 2.