“I signed with Roc Nation because it just felt right,” TwanDaGod tells HollywoodLife about partnering with the entertainment agency founded by Jay-Z. After producing for artists like JayDaYoungan, Rylo Rodriguez, and YoungBoy Never Broke Again, the Atlanta-based TwanDaGod was starting to catch the ear of some influential people, and that’s how he ended up signing on the dotted line with RocNation.

“I met with Andrew Gould, the EVP, and Michelle Bell, the VP of Creative,” he shares in an EXCLUSIVE interview. “They were very welcoming and loved the music I presented to them. They also came to my studio in ATL to meet me, and I played some records that me and my team 6Lement had been working on, and they loved it.”

The love is mutual, as TwanDaGod shares that RocNation is part of his musical journey. “I grew up listening to Jay Z, Kayne, Rihanna, etcetera,” he tells HollywoodLife. “So when I heard Roc Nation was interested, I was overly excited. I really didn’t feel it was big until my first short form of my contract; then I was like this was really happening.”

There are some major names on the RocNation roster. Along with Rihanna, Kalan.FrFr, Yo Gotti, Snoh Aalegra, Tinashe, Willow, Jaden, J.Cole, Jay Electronica, Alicia Keys, Fat Joe, Miguel, Lil Uzi Vert, Normani, and so many more work with RocNation on a variety of projects. However, if given the keys to the kingdom, there are two RocNation stars that TwanDaGod would love to collaborate with. “Definitely Jay and Ye would be my top artists I would work with,” he tells HollywoodLife. “They influenced me in many ways from a child to an adult.”

One can see that influence on the playlist that TwanDaGod has EXCLUSIVELY shared with HollywoodLife. When asked to curate a playlist of RocNation songs that matter most to him, TwanDaGod selected a handful of tracks from Hova and Ye. 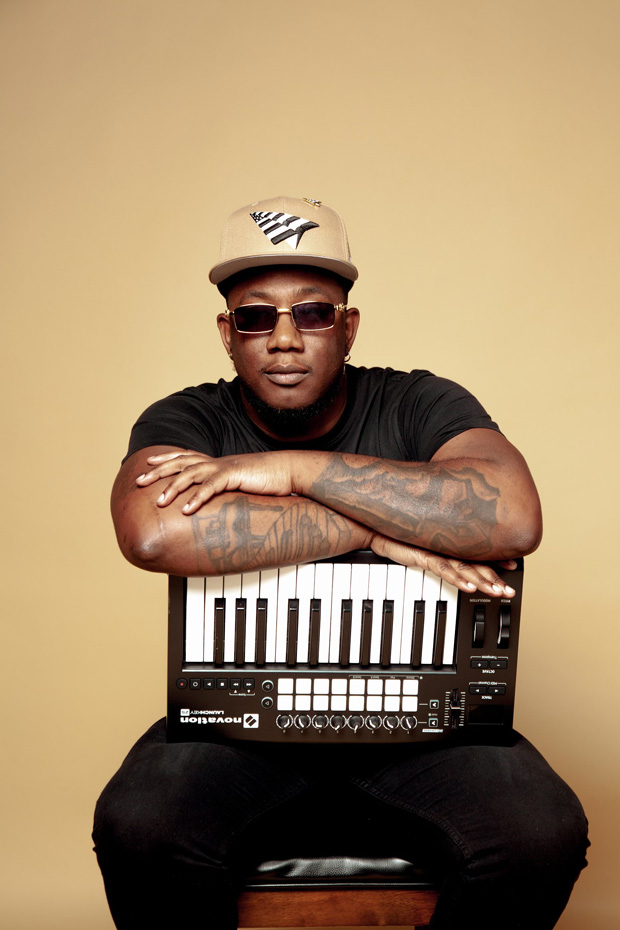 There’s “All Falls Down” (“This song is put together so well, and the message from the song still lives on today,” says TwanDaGod), “Stronger” (“This is a song I wake up to work out and it just motivates me”), “Runaway” (“I like this because I feel like I connect with it; I’m a workaholic and it always causes problems in my relationships”) and “Devin IN A New Dress (“This whole song is a vibe and the production is amazing”). The pair of Jay-Z songs he picked include “Lost One” – which TwanDaGod says he relates to “because I lost a lot of people throughout this grind to get where I am at now” – and “Hard Knock Life,” a song that was the introduction to Jay-Z for many, including TwanDaGod. “This was one of the first songs I heard from Jay-Z growing up,” he shares when explaining his selection.

With that head full of reverence for the past, TwanDaGod turns his thoughts to the future. Known for his high-quality production, TwanDaGod will proudly represent the 6Lement team while using his high-level skills at RocNation. “TDG fans will be 6Lement fans,” he says, saying that those fans are “lovers of good music in every genre – from hip-hop to R&B to pop.” With a robust roster of talent that crosses all genres, there will be plenty of demand for TwanDaGod’s skills.

“I plan to bring back music with more meaning that’ll last longer with the listener,” he tells HollywoodLife when asked how he plans to help RocNation in this new decade. “I feel like that’s what’s missing from music right now. Music with substance.”

Kanye West Then & Now: Photos Of The Rapper From His Young Days To Superstardom