“Travis Barker is a legend, and just one of those guys, for real,” 24kGoldn tells HollywoodLife when discussing his recent “In My Head” music video. The visual doesn’t just pair Goldn with his Genies avatar but sees Travis as a short-order cook at a roadside diner, a pit stop on Goldn’s daydream road trip. The rapper, who topped the Billboard Hot 100 alongside iann dior with “Mood, — is poised to do it again with Travis. However, as Goldn tells HL EXCLUSIVELY, the real success of “In My Head” was having a chance to work with Travis, 46, and discover that, sometimes, it’s okay to meet your heroes.

“A lot of times when you meet people that have accomplished as much as he has, they might be self-important or entitled, but Travis Barker is not like that at all,” Goldn tells HollywoodLife. “He’s one of the most genuine, kind, and open-minded individuals that I’ve met, period. So honestly, it was a pleasure to work with him, and I’m forever thankful for the impact he had on this song.”

While the video is impressive, the song itself is poised to be a song of the summer. Goldn’s natural charisma once again shines on the melodic-rap track, and he adds to the case of the Bay Area being the new capital of hip-hop. “This song came together after a session I did with Einer Bankz,” says Goldn. “He’s pretty well known in the hip hop community for these videos he does where he plays artist songs on ukulele or guitar with them and have them rap along. He recently got into producing, and he’s from where I’m from, the Bay, so I was excited to work with him because I knew about him growing up. He played this guitar loop, and the song pretty much wrote itself. After that, I took the song around to a couple of people trying to figure out how to really bring it to life, from just vocals and a guitar, and Travis Barker, being who he is, just brought it to life and made it feel rock and roll while still feeling hip-hop and current with the times.”

Travis Barker: Photos Of The Rocker

Naturally, Travis had to be in the video, but Goldn shares that Barker volunteered for the project without really knowing what he would do. “Honestly. we didn’t tell him he was gonna play a cook in a diner until he got on the video already,” says Goldn. “I hope somebody had told him before, but nobody had told him. He was a real team player, man, he put on the smock and everything, and it was fire. And I think that’s a big reason the video turned out so great too.”

Another significant element to “In My Head” is the trio of avatars inhabiting 24kGoldn’s thoughts. Created by Genies, culture’s leading avatar technology company, the trio of Goldns captures the rappers’ aspects and moods. When Goldn first gazed upon them, he tells HollywoodLife that his first reaction was, “Damn, that’s hot.” 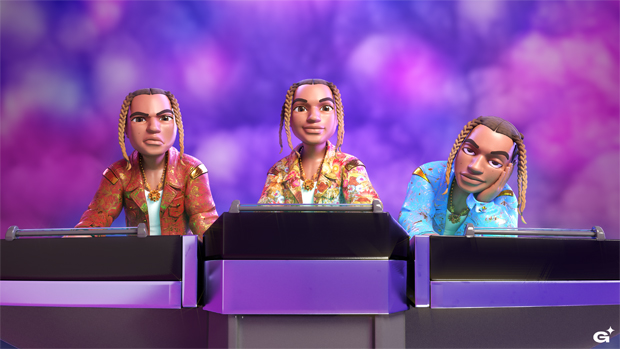 “I was very involved,” adds Goldn. “I picked out the outfits, designed the background and how the Genies would fit into the video.” Goldn joins a list of musicians – including Justin Bieber, Nessa Barrett, Cardi B, and Goldn’s “Mood” collaborator, iann diorr – in creating Genies to develop an avatar. Genies allow artists like Goldn to retrain full ownership of the avatar, and with Genies’ NFT avatar ecosystem, Goldn can capitalize on these versions of himself in new exciting ventures.

Like, how about an official 24kGoldn video game? “I would love to have my own video game one day,” Goldn tells HollywoodLife. “I grew up playing the 50 Cent G Unit game [either 50 Cent: Bulletproof or 50 CentL Blood on the Sand] and the Def Jam fighting games. I don’t know if it would be exactly like those, but I like the idea of an open-world game, maybe like a GTA or a 2K, but you’re an artist instead of a basketball player or a menace to society.”

With that said, 24kGoldn 2k24 might be the next big thing to hit your Playstation or Xbox. As for the rest of 2022, Goldn says, “besides diving into Web3, I’m about to go on tour this May to play songs from my album El Dorado as well as some new songs like ‘In My Head.’ It’s called the Better Late Than Never Tour. Make sure you get your tickets ASAP!”