Three Hollywood icons graced the stage to honor The Godfather’s 50th anniversary. Al Pacino and Robert De Niro joined Francis Ford Coppola on stage during the Oscars to celebrate the iconic film. Francis, who directed the film, kept things brief, but the power of those three men on stage was not lost on anyone. 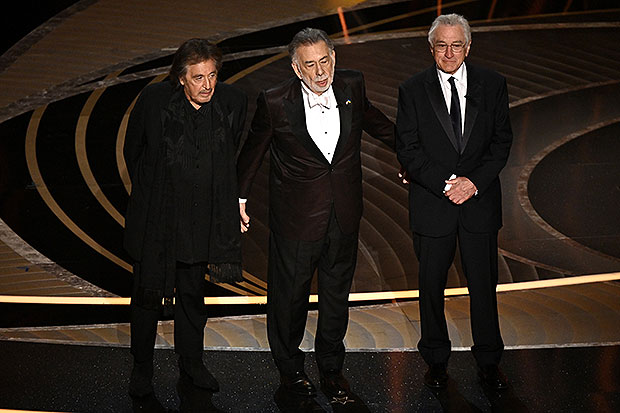 The entire crowd gave Al, Robert, and Francis a standing ovation. After two actors and directors walked off stage, Robert shared a hug from Diddy. The rapper and mogul introduced The Godfather reunion.

The film also starred the late Marlon Brando. The legendary actor played Corleone patriarch Vito Corleone. Marlon would go on to win Best Actor at the Oscars, but he did not accept the award. Native American actress Sacheen Littlefeather notably attended the Oscars in Marlon’s place and represented the actor, who boycotted the ceremony to protest Hollywood’s portrayal of Native Americans.

The Godfather was released in 1972 and became an instant classic. The film racked up big at the Oscars, earning Best Picture, Best Actor, and Best Adapted Screenplay. The Godfather was also nominated for an additional 7 Oscars.

The movie was the highest-grossing film of 1972 and spawned two sequels. Similar to the first film, The Godfather Part II is widely regarded as one of the best films of all time. It also became the first sequel to win Best Picture. De Niro played a young version of Brando’s character and won Best Supporting Actor for his performance.

The same year as The Godfather’s 50th anniversary, Paramount+ is gearing up to release a series about the making of the legendary film. The Offer chronicles the development and production of the game-changing gangster film. Miles Teller is playing Albert S. Ruddy, one of the producers of The Godfather. He co-stars alongside Matthew Goode, Juno Temple, Dan Fogler, and more. The Offer is set to premiere April 28 on Paramount’s streaming service.