In probably what will be the cleverest use of a pun throughout Super Bowl LVI, Toyota has decided to put a new spin on an old colloquium. While millennials and GenZ might be more acquainted with Keeping Up with the Kardashians than the idiom “Keeping up with the Joneses” (or the 1913 comic strip that used the term), the automotive brand is doing something different. It recruited its own Joneses – comedian Leslie Jones, actress Rashida Jones, and movie icon Tommy Lee Jones – for their ad airing during the Feb. 13 game. Throw in “It’s Not Unusual” by Tom Jones, and this is the most pun-tastic, mud-slinging, exciting commercial in 2022. It all gets kind of crazy towards the end when Nick Jonas shows up. “It’s ‘keeping up with the Jonases’ now,’ he says.

Fans first got a taste of this three-way tango in teasers for the commercial. In the one featuring Tommy Lee, the Fugitive star drives up to a desert crossroads in a Toyota Tundra. Suddenly, a Toyota TRD Pro rolls up next to his car, and both Tommy and this stranger’s ride have license plates that read #1JONES. Engines roar, and Tommy, with his trademark gravely tone, says, “Game On.” 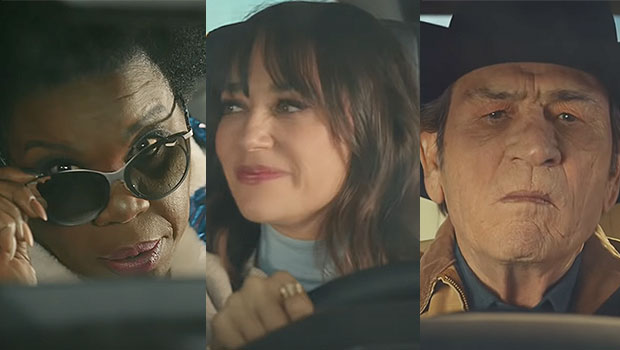 But who is in that other Toyota truck? It turns out it’s Leslie Jones. Her teaser shows Leslie’s perspective as she pulls up to Tommy’s truck. After a few revs of the engines, the Saturday Night Live star pulls down her glasses, looks towards the camera, and lets everyone know what’s about to happen. “I’m going to make a grown man cry,” she says with confidence.

Cut to the third teaser, mid-race, and Rashida is driving in through the mud. Her license plate ALSO reads “#1 Jones,” and she joins in. After splashing some mud on Tommy Lee’s truck, the Parks & Rec star shouts, “OOPS,” before putting on her game face.

The question is – will any other Jones show up? Will Norah Jones drive in and steal the checkered flag? What about Rashida’s father, Quincy Jones. There’s January Jones, James Earl Jones, Catherine Zeta-Jones, Star Jones, Indiana Jones, Jesus Jones, Felicity Jones, Lolo Jones, Steve Jones of the Sex Pistols, Duncan Jones, Tool guitarist Adam Jones, Allen Neal Jones (aka WWE’s AJ Styles) Mick Jones of The Clash – so many Jones. It’s hard to keep up with them all. Maybe that’s the point?