Like the two vast and trunkless legs of Ozymandias, Divided Heaven gazes upon the “Monuments” to the modern world in the band’s new song, only to turn away for something better. “Be a monument for the living / not a puppeteer for the dead,” sings Jeff Berman, the creative mind behind the punk outfit. “We both know history won’t be forgiving / write our names in the wet cement.” With a quiet but resounding vibe — harkening to Joe Strummer and Anti-Flag, whose label will release Divided Heaven’s upcoming album — “Monuments” stands as a declaration for celebrating the moment, to giving flowers to those still alive instead of laying them at the base of statues honoring the past. ‘

“‘Monuments’ represents my attempt to not lose my f-cking mind amidst this dark period,” Jeff Berman, aka Divided Heaven, tells HollywoodLife. “I can try to rationalize the rapid consumption and disposal of art and music. I can try to excuse the unethical rates of music streaming services. I can try to have faith in my fellow citizenry. But sometimes, I just can’t. Sometimes I feel like I’m being gaslit into accepting culturally and financially exploitative behaviors, and I f-cking hate it.”

“‘Monuments’ is about building a better future by focusing on the people and the good that they do. The song was produced by Tim van Doorn who created a beautiful, powerful arc that I am incredibly proud of, and I am honored to share this song (and video) with you. Born to love, not born to die.”

“Monuments” comes from Divided Heaven’s Oblivion, out Feb. 4 on A-F Records. In an EXCLUSIVE interview, Jeff speaks dishes about Oblivion, including why his favorite song on the LP is “the most difficult for me to listen to.” As someone who played his first show in 1995, he also reflects on the advertised 90s influence on GenZ – and if the nineties revival is greatly exaggerated or not.

HollywoodLife: “Monuments” arrives ahead of your upcoming album, Oblivion. How does it feel to be so close to the release date?

Jeff: Exciting. Nerve-racking. Relieving. Depressing. But mostly exciting. “Monuments” is the first track on Oblivion, but it was the last song written for the album. I actually recorded the first couple of demos for it in the bathroom of my Studio City apartment before sending it to my producer, Tim van Doorn.

This entire process of writing this record and recording this record has put me through an emotional ringer. My life has changed more in the last two years than ever before, and it is both really cool and quite eerie how Oblivion represents that change. Obviously, I am very excited for people to finally hear this record. But there’s always a little trepidation about how a record will be received. And also, once Oblivion is out, it’s no longer entirely mine, and sometimes relinquishing that control can feel odd.

Oblivion marks your first album since 2018’s Cold War. Cold War marked a moment of transformation when Divided Heaven went from strictly a solo project to a three-piece outfit. What would you say is the biggest change/difference between Oblivion when compared to Cold War?

The biggest differences between Cold War and Oblivion are intensity and viciousness. The songs on Cold War were written to be moving, emotional, and memorable love songs. I really tried to put an anthemic DNA into a number of the songs like “The Daughters and Sons” and even the heartbreaker ballad “Dance With Old Habits.” But Oblivion marks a turning point away from everything I had done in the past. On a personal level, I stopped giving a sh-t about people’s perception of Divided Heaven. Solo singer-songwriter? Sure. Rock band? Sure. Punk band? Sure. Pinpointing the Divided Heaven identity no longer mattered to me. What mattered was doing a different and better Divided Heaven record than my previous three. A new direction with a renewed focus on writing the most provocative, confrontational, and emotionally brutal songs that I could. And “Monuments” is a great example of that change. 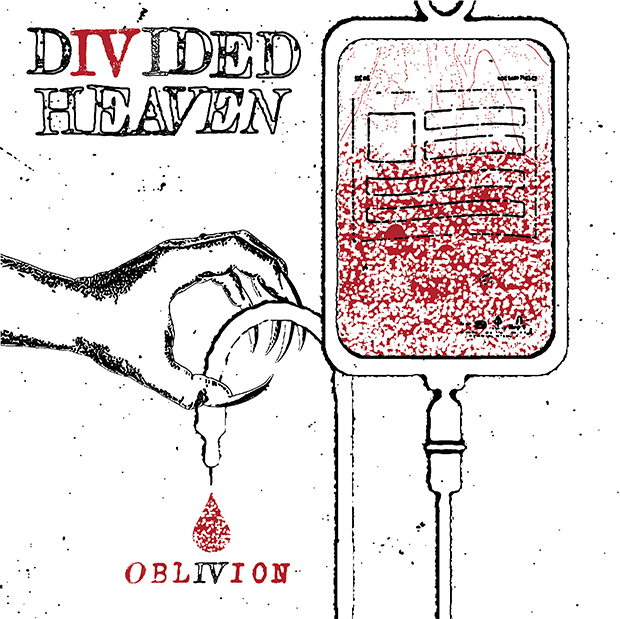 Is there a moment on Oblivion that you look to as a personal triumph or achievement? A certain line that took work to get right, or a bridge that connected a song together?

Yes. The song “Panic.” It’s my favorite song on Oblivion and it is also the most difficult for me to listen to. Lyrically, “Panic” encapsulates every emotion, every dizzying high, and every devastating low of my entire career. Coincidentally, I feel that the bridge in “Panic” is the peak of the album and symbolizes the reality that this could be my last record. I will let the listeners listen to the song and read the lyrics and come to their own conclusion, but I will say that the decision to (lyrically and musically) take that bridge off a cliff was deliberate. We’ll see where we land.

Oblivion is Divided Heaven’s first album on A-F Records. Did this new home affect how Oblivion came out?

Oblivion coming out on A-F Records did not have an effect on the album itself. However, I will say that it’s a very fitting home. Oblivion is a very political record. I have always written political songs, but the songs on Oblivion are blatantly political, overtly political to the point of confrontation. That influence is derived from one of my favorite bands, Anti-Flag. I consider it an honor to be on their record label.

There seems to be a ’90s revival – or, at least, a flush of ’90s aesthetics and properties are resurfacing in the pop-culture consciousness. As someone who has been active in music since then – I read that your first show was in 1995 – do you see the attitudes of that time popping up in music? Or is this revival exaggerated, in your opinion?

It’s quite hard to tell. For the most part, and I don’t want to generalize, it seems as if most of the bands now that have that 90s aesthetic and vibe were not around in the 90s because they weren’t old enough. So it’s a throwback, but good on them. I was barely a year old when Shout At The Devil came out, and I’m still trying to capture that vibe in my songs. The wheel is gonna turn…

But at the same time, when I was a kid in the 90s playing my first shows and doing my first few tours, I have no f-cking idea what I was doing. I was just so into it and so in the moment that I was oblivious (no pun intended) to how my small corner of the subculture was playing-out in popular culture. So, sometimes when I see current bands that have a thick thread of 90s vibe, it feels as foreign to me as polka. Personally, I’d rather see a Bowie revival with a rash of young bands reviving a “Heroes” vibe instead of trying to sound like Superdrag and Blue Album-era Weezer. Whatever gets people writing songs and being creative is okay by me.