New hair, who dis? When Sarah Hyland attended the People’s Choice Awards, her plus-one for the night wasn’t Wells Adams but the killer bob she debuted on the event’s red carpet.

If there were a People’s Choice Award for the best hair makeover, Sarah Hyland would have won. The 31-year-old Modern Family alum debuted her stylish bob right before the Dec. 7 event, joining fiancé Wells Adams on the carpet. As Sarah took in the photographer’s flashes, Wells, 37, even snapped a picture himself on his phone, excited to see Sarah live her complete glamour fantasy. Sarah, who used to rock long dark locks, arrived at the PCAs in a puffy white two-piece Vera Wang outfit, matching Christian Louboutins and plenty of bling on her fingers and ears.

Sarah gave her fans a sneak peek on Instagram on Monday. “I did a thing today…. You’ll all see tomorrow at the @peopleschoice awards,” she wrote, adding the haircut emojis. When she and Wells arrived, she gave more insight into her new makeover. “I wanted to go for a Parisian moment,” Sarah told Laverne Cox for E! ‘s live coverage of the red carpet. “I just got a fresh new ‘do, and I said, ‘Mama wants to be a tiny little Paris doll.'” 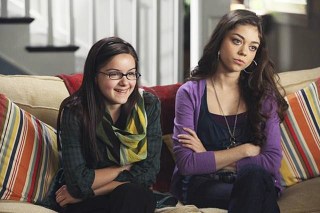 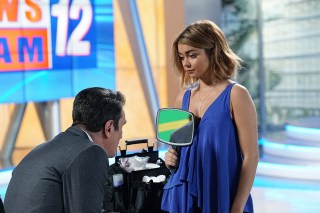 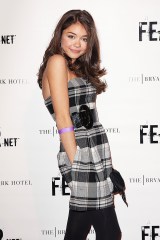 This bob is the latest in the line of hairstyles Sarah’s sported over the years. In the past, she’s dyed her hair blonde, red, and pink. Hair is a huge deal for Sarah since the medication she takes for kidney dysplasia caused some initial hair loss. But, as she told Allure in 2019, her hair came back curlier and fuller than ever. “I always think it’s funny because my hair has been short since, like, 2013. I just wear extensions for Haley now,” she said. “I didn’t know just how curly it was going to be, though… I’ve had a lot of my hair fall out from being on medications and all that stuff, and now that I’m finally getting all this new growth, it’s even curlier.”

It’ll be interesting to see what hair Sarah sports when she and Wells tie the knot. The couple got engaged in July 2019, and after postponing their wedding due to the COVID-19 pandemic, Wells told HollywoodLife that they had to push back the nuptials again. “Wedding planning during quarantining is just moving your wedding further back and further back if you’re playing it safe, which we are,” he said in an EXCLUSIVE interview at the MPTF NextGen Summer Party in September. “We’re planning on moving it again, probably.”