The star has been documenting her love for a good strapless dress on Instagram, posing in a snake print from Magda Butrym on Nov. 20. “no snakes were harmed in the making of this dress,” Brie captioned the post.

In early November, Brie also shared a video of herself lifting some weights, writing, “Sometimes I surprise myself.” The workout regime could be pegged to the upcoming Captain Marvel sequel The Marvels, scheduled for a February 2023 theatrical release. Directed by Nia DaCosta, the film will center on Brie’s Captain Marvel, also known as Carol Danvers, as well as Ms. Marvel‘s Kamala Khan (played by Iman Vellani) and Monica Rambeau (played by Teyonah Parris). 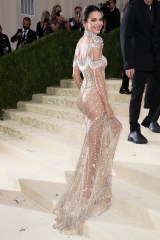 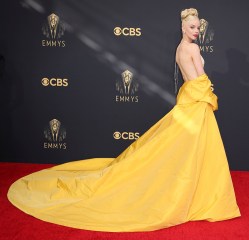 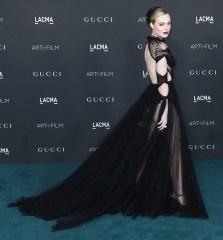 Samuel L. Jackson, Jude Law, Randall Park, Cobie Smulders, and Lashana Lynch, among others, will also star in the film. While speaking to SiriusXM’s The Jess Cagle Show in August, Brie called the sequel “juicy” and, in true obligatory Marvel employee form, remained mum about specific details. “A lot of really juicy things happening that I cannot say a word about, but boy oh boy is it good,” the actress teased. “And you’re going to be very excited about it.”

Brie also praised the “amazing” Nia, teasing that she came up with an “incredible take on this story and on this film.” The director spoke to author Roxane Gay for Inverse in October, the director offered some insights into the film, explaining that she approached the characters “as human beings and not necessarily as superheroes.”

As for her process, the self-proclaimed “Marvel trash” director said, “My research was going into the history of Carol Danvers first and foremost, because it is a crazy wild ride, what they did to her in the comics in the ‘80s. And then with Monica, she’s really fun, her origin story and her introduction in the comics.”

Nia continued, “I tried to not get overwhelmed because, as with most comic book heroes, there are like seven different origin stories and there’s different power sets that kind of contradict and don’t really overlap well. It was really choosing what’s been established already in terms of the MCU and then what’s going to work, most compellingly, for our story.”