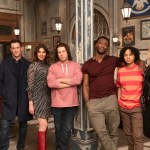 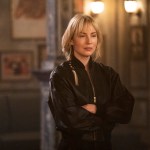 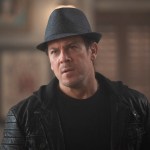 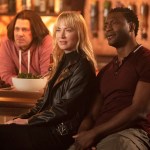 Sophie and Breanna sit down with a woman named Stella in this EXCLUSIVE preview of ‘Leverage: Redemption.’ Sophie soon realizes that Stella is none other than The Jackal!

“What’s your name?” Sophie asks Joanna Cassidy’s character in this EXCLUSIVE preview of the all-new Leverage: Redemption. The woman replies, “I’ve had so many names. You know, we women are always being forced to change. We’re lucky we even get to spend a bit of time as ourselves.”

Sophie says, “Well, we have that in common.” Breanna, looking through the woman’s mail, figures out that her name is Stella. Sophie asks Stella who she was trying to call. “I was calling for help,” Stella explains. “My legal guardian is selling my home, my possessions, my entire life.”

Stella reveals that her legal guardian, who was assigned by the court, took her phone. She can’t even drink coffee! Sophie grabs Stella’s hand to comfort her and notices Stella’s gorgeous ring.

Sophie actually recognizes the signet ring and notes that it was stolen. Stella admits it was stolen almost 30 years ago. Sophie looks on the wall and realizes there’s a piece of art on the wall she actually tried to acquire from the Lourve in 1995.

“But I was beaten to it by The Jackal,” Sophie says. Stella replies, “I told you had many names.” Stella has a lot of explaining to do!

The synopsis for this episode reads: “The Leverage team explores the failing memory of a legendary grifter to try and find her greatest score before her abusive Elder Guardian gets his hands on it and takes over her life.” Eight new episodes of Leverage: Redemption season 1 will drop on IMDb TV on October 8. Leverage: Redemption takes place 8 years after Leverage ended. Sophie, Parker, Eliot, and Alec team up with Harry Wilson and Breanna Casey in the spinoff.