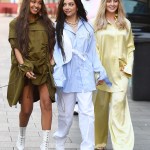 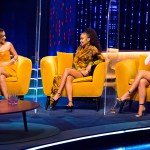 Jesy Nelson said there’s been ‘distance’ between herself and the other Little Mix members ever since she quit the girl group in Dec. 2020.

Since leaving Little Mix in Dec. 2020 to focus on her mental health, Jesy Nelson has lost touch with her former bandmates. “I haven’t spoken to the girls,” the 30-year-old singer told Glamour UK in an interview published on Wednesday, October 6. “It is weird because for so many years we were as close as sisters, together every hour of the day for weeks, sharing beds, laughing, crying just 24/7 the four of us together and then…Nothing.”

Jesy shocked fans when she suddenly quit the popular girl group at the end of last year, leaving Perrie Edwards, Leigh-Anne Pinnock and Jade Thirlwall to continue on as a band of three. In the ten months since, Jesy has “sent a few texts” to the other British pop stars, “but that’s it.” She told Glamour UK, “I can’t explain it, it’s like there has to be this distance. We were so close so you can’t do in-between, there has to be space.” However, Jesy does have hope that she can eventually repair the strong relationship she once had with the Little Mix girls. “Hopefully at some point in the future we can all come back together. I love them. They are my sisters in so many ways, but for the time being we just don’t talk,” she explained.

On the bright, Jesy said she’s seen an obvious improvement in her mental health since making the game-changing decision to leave the group. “I feel in control of my life, I don’t have that constant anxiety, the feeling I might be letting someone down or voicing an opinion that won’t fit with the others,” she told Glamour UK. “It’s so completely liberating and that has been massive for my state of mind.”

Jesy and the rest of Little Mix formed together on the U.K.’s X-Factor in 2011. The foursome won the season, and they went on to huge success with six different albums — DNA, Salute, Get Weird, Glory Days, LM5, and Confetti. But everything changed when Jesy announced her departure from the group on December 14, 2020. “Being in the band has really taken a toll on my mental health,” she said in a statement. “I find the constant pressure of being in a girl group and living up to my expectations very hard.”

In the wake of Jesy’s exit, Little Mix (now a group of 3) has announced a tour for summer 2022. Jesy, meanwhile, is focused on her solo music career. “Music is my life. It’s so powerful for me,” she told Cosmopolitan UK in May 2021. “I’m in the studio just having fun. I loved the music I made with Little Mix, but it wasn’t the kind of music I listen to. It just feels so nice to be making music that I love. I feel really content and happy,” Jesy said.