With the first day of Fall about six weeks away (Sept. 22, FYI), it’s time to get in as many Summer late-nights and never-ending dance parties in before the weather gets cold. Helping to turn up the heat – and give you get the motivation to get out of the house and back to the newly-reopened club — is Joel Corry, with his new high-energy banger, “Out Out.” With a surging beat and electro production, “Out Out” is the extra metaphorical kick you’ll need to safely return to the nightlight after more than a year away.

“I am buzzing to collaborate with my bro Jax Jones and the amazing Charli XCX and Saweetie,” Joel shares with HollywoodLife, while also explaining the inspiration for this new track. If that hook sounds familiar, it’s because it’s from “Alors on danse,” the hit single from Belgian musician/rapper Stromae. Joel tells HL that he’s a “huge fan” of the 2010 song – which went to No. 1 in several European countries and got a Kanye West remix – and he “wanted to put a fun spin on it for Summer 2021. Now that we can party again, I want everyone to let their hair down and go OUT OUT!” 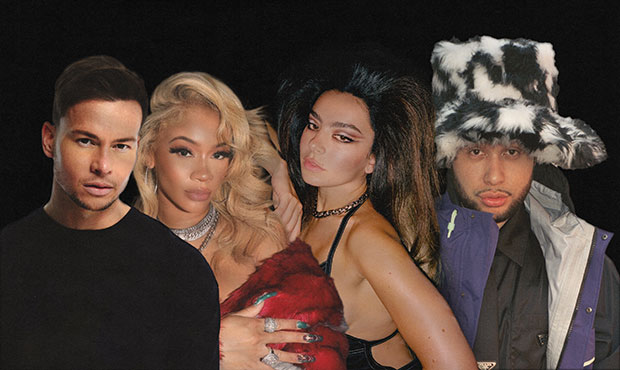 Joel has been busy in 2021, seemingly building the soundtrack for live music’s comeback. In addition to his remixes – Megan The Stallion’s “Body,” H.E.R.’s “Damage,” Maisie Peters’ “Psycho,” and Ed Sheeran’s “Bad Habits” – he’s also released “Bed,” a collab with David Guetta and Raye. It’s becoming one of the songs of the year, amassing over 321 million global streams and hitting No. 1 on the US Dance Radio charts.

This success comes on the heels of what was arguably Joel’s biggest year ever. 2020 saw him sign with Atlantic Records UK and release a trio of superstar singles – “Sorry,” “Lonely,” and “Head & Heart” featuring MNEK, “Lonely” – that each went Platinum (triple-Platinum in the case of “Lonely.”) Joel continues to be a presence on the Dance charts. Soon, he’ll be a presence in your heart. His first-ever United States tour begins in September. Click here for details on when and where he’s playing near you, so you can go “out out” and see him.