Florence Pugh traded in her signature dirty blonde hair for a dark brown for a new role! See her transformation.

Florence Pugh is no longer a blonde! The English actress, 25, shared a first look of her new Netflix period thriller film The Wonder on Instagram on Thursday, Aug. 12 and showed off her character’s ‘do: dark brown hair — a major departure from her usual dirty blonde locks.

“First look at ‘The Wonder,'” Florence captioned the post. “We’ve been traipsing around the Irish hills for the last week and it’s truly been a magnificent start to a beautiful and exciting film. What a story to get our teeth stuck into, what a crew to be working alongside and a fantastic director Sebastian Lelio to be leading us!” She concluded, “This will be fun.”

The star poses pensively among what looks like several graves with crosses and wears a billowing old-timey blue gown. The Wonder is an adaptation of Emma Donoghue’s novel of the same name. Set in the Irish midlands during the mid 19th century and inspired by the real-life historical phenomenon of “fasting girls” during that time, the psychological thriller will follow an English nurse (Florence) who visits a small village to observe a young girl who has stopped eating but has managed to survive for months.

The film, slated for a 2022 release, will also star Ciarán Hinds, Elaine Cassidy, Toby Jones, and more. It certainly isn’t Florence’s first thriller nor period drama: the actress has starred in spooky films like Midsommar and Hereditary, and most recently starred in the period drama Little Women opposite Saoirse Ronan and Timothée Chalamet. Most recently, she starred in Marvel’s Black Widow.

Within all of those roles, Florence rocked her signature dirty blonde ‘do. But that’s not to say the actress isn’t a fan of mixing things up. During the Black Widow press tour in June, the star dyed her tips a stylish lavender purple to accentuate the blonde, as documented in her Instagram post above. The actress brought the look to Paris Haute Couture Fashion Week, too, and rocked the lavender tips at the Dior show in July as she sat next to models Cara Delevingne and Suki Waterhouse. 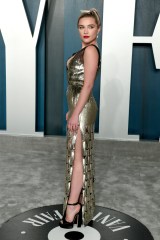 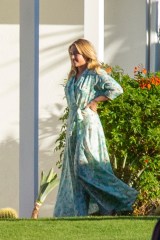 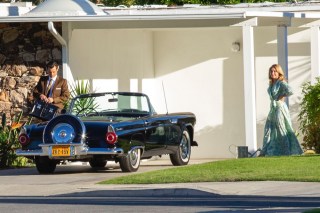 Who doesn’t love a good hair transformation in the name of cinema!