Death is scary. Rarely has anything been more terrifying than mortality, with thoughts of a violent end – or simply, ceasing to be – keeping many up at night. Dying is fine, but death? Who would like death if death were good? Yet, after thinking about it and listening to “Woke Up Dead” — the newest single from JD Pinkus — death can be peaceful. It can be reassuring and not as frightening as one might think. Against the sparse, haunting pickings of his banjo, the Butthole Surfers/The Melvins member delivers a set of striking vocals as if taken from a secret backwoods sermon. “I didn’t wake up this morning,” JD sings at the start of the video, animated and directed by Maxwell Sebastian (and produced by Josh Bishop). “I got the feeling / I ain’t dreamin’ / I’m gone, and I ain’t coming back.”

For fans of the cacophony that the Surfers and the Melvins have wrought through their respective careers, JD’s “spacegrass” stylings are a drastic shift towards the minimalistic and quiet. “I think we all have so many sides of us to explore,” he tells HollywoodLife. “The banjo helps me do it musically. My style of writing with it is very, say, non-traditionalist. I use it to make the songs sound the way I want them to. I’m not that good at other people’s styles.”

JD played bass with the Surfers from 1985-1994 (and ever since their 2009 reunion), appearing on their landmark albums Locust Abortion Technician, Hairway to Steven, and Independent Worm Saloon. He filled in for Jared Warren during the Melvins’ 30th Anniversary tour in 2013 and subsequently joined them full-time. In 2018, he released Keep On The Grass, the first taste of his brand of bluegrass – “spacegrass.”

“I would be booed outta any Bluegrass stage I tried to make noise at….unless I dosed ’em,” he tells HollywoodLife. JD will release Fungus Shui, his second Americana/banjo-punk-roots album, on Aug. 20, via Shimmy-Disc. Ahead of the album’s release, JD spoke with us about why he gravitated towards the banjo, the upcoming “Fungus Shui Trinity,” and how the video for “Woke Up Dead” came about.

HollwoodLife: What happened the morning when you woke up dead? I.e., what’s the story behind this song?

JD Pinkus: Well, I’ve been known to be a bit of a psychonaut. I thought I was dead once in Peru. It was a beautiful place, decorated with confusion and lined with comfort. Songs [that were] happy and sad at the same time. Maybe this little country blues song relays a little bit of that in its own strange way. But I would rather the listener interpret it themselves.

Why did you go with an animated video for “Woke Up Dead” instead of shooting a live-action visual?

A fella named Josh Bishop hit me up about doing some video work with me when he heard my new record was done and a release date set. I asked him which song he wanted to do… he picked three! They’re all very different. This one, ‘Woke Up Dead,’ he had in mind for his animated artist friend of his Maxwell Sebastian. His capturing of that thing that’s hard to capture or explain, [it] was right on point. 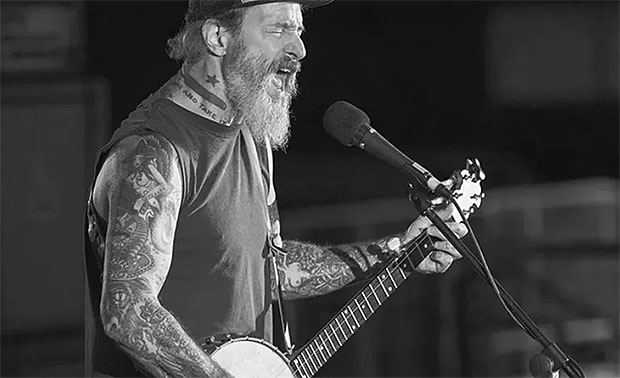 “Woke Up Dead” reminded me of this Steve Martin quote: “The banjo is such a happy instrument–you can’t play a sad song on the banjo – it always comes out so cheerful.” Clearly, that’s been proven wrong, but have you found any restrictions for the banjo regarding your music? Or is it sort of your “spiritual instrument,” a totem that channels your thoughts best?

I think we all have so many sides of us to explore. The banjo helps me do it musically. My style of writing with it is very, say, non-traditionalist. I use it to make the songs sound the way I want them to. I’m not that good at other people’s styles.

What’s the biggest misconception about bluegrass (or, in this case, “spacegrass”) music?

Well, first off, I would be booed outta any Bluegrass stage I tried to make noise at….unless I dosed ’em… Spacegrass is what I refer to it as, because it’s always easier to have your own genre.

Your album Fungus Shui arrives on August 20. It kicks off with the “Fungus Shui Trinity.” What can you share about this trio of songs?

It’s more of a four-part trinity if you include ‘Woke Up Dead,’ but I didn’t… The Fungus Shui Trinity was put together like a Spacegrass Opera on Fungal Mountain. It has elements of different places and sounds, from different psychonautical journeys I’ve had the opportunity to experience. What I heard internally and externally. I like to play the Fungus Shui Trinity live, and that’s a proper representation to me on the album.