Damon Sharpe goes through the highs and lows of fame in his new video, and he tells HL about the collab with Disco Fries, as well as his own favorite celeb encounter.

The video for Damon Sharpe’s “15 Minutes” hits close to home. Though he’s a Grammy Award-winning producer and a DJ who signed with Armada Records last year, there was a point in time when he wasn’t so established – and he wasn’t so humble. “The video concept itself is loosely based on my early career chapter,” he tells HollywoodLife. The video – which features cameos from The Martinez Twins and Mario Lopez – sees Damon desperate for the first taste of success — of fame. After achieving it through some strategic viral marketing – emphasis on the “viral” –  the stardom goes to Damon’s head.

“When I was a teenager, I was in a boy band that saw some quick overnight success,” he said, referencing an easily Googleable past that is literally a lifetime ago. “We had our own tv show, a record deal, dolls, pajamas, posters, lunch boxes, etc. I really got full of myself and became a little ‘Hollywood.’” As they say, what comes up, must come down, and as depicted in the “15 Minutes” video, Damon’s time as the hot new thing ends as quickly as it began. However, the video doesn’t bring back painful memories, as he tells HollywoodLife that he’s “so grateful I have had that experience” because it taught him a valuable lesson. “It instilled humility and work ethic into me that I apply to my life every day!”

While the video plays around with Andy Warhol’s concept (though the Smithsonian notes he probably didn’t say, “In the future, everyone will be world-famous for 15 minutes”), the song play with the idea — that Damon only needs “15 minutes” to capture a person’s attention – and their heart. In a context of a YouTuber in search of followers, Likes, and hearts, it’s a brilliant commentary on the modern internet celebrity. In the context of the dance floor, “15 Minutes” is the next EDM banger that will be playing when you find yourself wanting to spend time with someone new.

Speaking of spending time with someone, Damon also tells HollywoodLife about a memorable celebrity moment, what he would do as a YouTuber, and what we can expect from him before 2021 comes to a close.

HollywoodLife: The term “15 minutes” usually has a negative connotation – that while everyone will have a moment of fame, that such notoriety is fleeting. In the song, you flip it on its head, saying that you only need “15 minutes” to convince a person to give love a shot. What was the inspiration for this clever twist?

Damon Sharpe: It actually started with the title I had jotted down in my phone notes and a very loose concept. I threw it out there in a writing session with my frequent collaborators Cimo Frankel and Rik Annema. Rik immediately heard an amazing chord progression, and Cimo threw out some killer melodies. Then we ping-ponged back-and-forth and ended up turning it into a more universal concept for the actual song even though it is based on the concept of 15 minutes of fame. Once Disco Fries jumped in and put their magic on it, we knew we had something special that, hopefully, everyone can relate to. 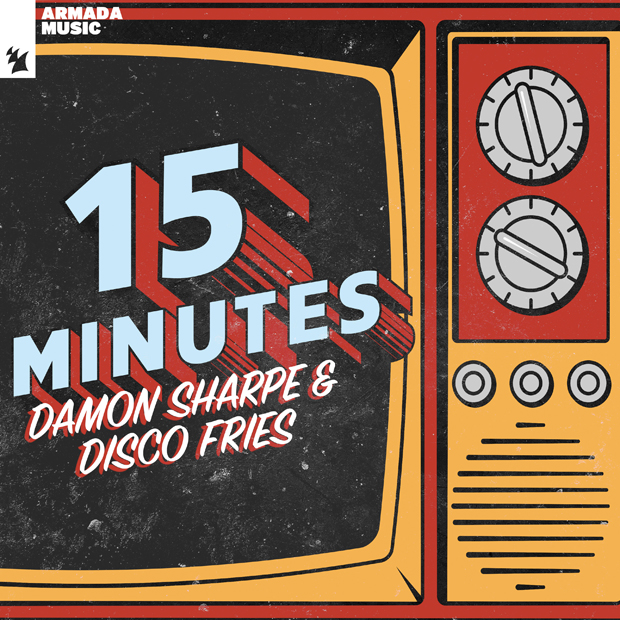 Meanwhile, the video captures how Warhol’s “15 Minutes” seems truer than ever. Was the plan to do a video like this – a sudden burst of fame leading to a downfall within the span of ’15 minutes’ – the moment you started working on “15 Minutes” as a song? Or, did the idea come later on?

I always had a loose idea of what I wanted the video concept to be. When I approached my friend, the genius director, Eli Sokhn, he loved the concept and put together a proper treatment around my blueprint. Our editor Ricardo Pérez really helped us with the finishing touches by doing sick graphics and helping tighten up the narrative.

If you were told you could only do one of the YouTube jobs – toy reviews, Dad Bod Pies, Magic – that you did in the video for the rest of your life, what would you do?

That’s a tough one because I truly love what I do! Probably toy reviews because I am definitely a kid at heart.

Your character in the video falls out of favor after he becomes a jerk while drunk on fame. On the flip side of that, did you have a memorable celebrity interaction — have you ever encountered a celebrity/star that was not a jerk?

Will Smith is super humble and present. The guys from Big Time Rush, who I worked with for years, are awesome.

Mario Lopez and the Martínez Twins, who both so graciously appeared in this video, are so down to earth and chill. Mario and I go way back, and I’ve been working with the Twins for over a year now. The video concept itself is loosely based on my early career chapter. When I was a teenager, I was in a boy band that saw some quick overnight success. We had our own tv show, a record deal, dolls, pajamas, posters, lunch boxes, etc. I really got full of myself and became a little ‘Hollywood.’ Fortunately, it was all taken away as fast as the fame came, and it was a real-life lesson I needed to humble myself. I’m so grateful I have had that experience, and it instilled humility and work ethic into me that I apply to my life every day! It’s always about resetting the time clock for another 15 minutes!

You’ve been working with Armada Records for the past few singles. How has that been?

I love Armada! Maykel, Jurrien, and Jeroen are so passionate about all the DJs and artists they sign- It’s a blessing. I’m now over 60M streams as an artist and have had two top ten dance radio singles as well! I’m so thankful for them!

I just co-produced and co-wrote the brand new Loud Luxury single “Safe With Me,” and I am working on the official exclusive remix for it as well! On September 3rd, my next single, “Paint The Sky” ft. Canadian vocal powerhouse Polina Grace will be released. I’m on my way to the studio as we speak to work on the Big Time Rush reunion album, which is exciting. My live shows are on the way as well! I can’t wait to see everyone come out to see me in my element! Excited to start traveling the world again!