On the 1-year anniversary of Naya Rivera’s death, many Hollywood stars — including former ‘Glee’ castmates — shared heartfelt tributes to the beloved actress.

Naya Rivera is being remembered by many of her famous friends on the one-year anniversary of her tragic death at age 33. Heather Morris, a close friend and former Glee co-star of Naya’s, paid tribute to the late actress on Thursday, July 8 with a heartfelt Instagram post that included a photo of Naya smiling. The post also featured a video of Heather receiving a tattoo that says, “Tomorrow is not promised.”

“It hasn’t gotten easier to write a caption,” Heather wrote in her tribute. “You are the brightest star in my eyes Naya Rivera. I’m so grateful GOD LAYED A HAND and brought us together as best friends, mom friends, scene partners, and everything in between. Your legacy lives on in kindness and being ‘that sassy queen’ in my eyes. I love you forever bebe girl.”

Other former Glee stars also paid tribute to Naya on social media. Kevin McHale wrote on Instagram, “I miss you. Every single day,” while Jenna Ushkowitz said in her own post, “Always a light, always with us. My heart is with you and your family today. love you Nougs.” Matthew Morrison also shared a photo of Naya and used a heart emoji to pay his respects to the late actress, as did Chris Colfer.

Aside from Glee actors, Tia Mowry honored Naya with her own sweet Instagram tribute. “Today marks a year since you’ve become an angel. This still doesn’t seem real. I miss you. I love you. My beautiful Naya,” the Sister, Sister actress said. Tia’s brother, Tahj Mowry, used to date Naya and reflected on his relationship with the late star in an interview with Glamour published last month. “She was definitely my first everything,” Tahj told the publication. “I think subconsciously it’s why I never really date like that because no one really ever… I know someday someone might, but it’s hard to measure up to the type of girl and woman she was.” 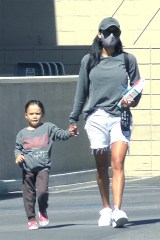 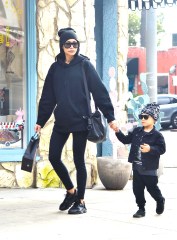 Naya died from drowning in Lake Piru, California on July 8, 2020. She went missing while swimming in the water with her now-5-year-old son Josey Hollis Dorsey, whom she shared with ex-husband Ryan Dorsey, 37. While Josey was found safe but alone in the watercraft while wearing his life jacket, Naya was nowhere to be found. Her body was recovered on July 13, 2020 by a rescue team following an extensive five-day search that included professional divers, helicopters, ATV vehicles, boats and ground personnel.

Naya’s family, mother Yolanda Previtire, and sister Nickayla, also remembered the late actress on July 8 during an emotional interview with Good Morning America. “Sometimes we’re afraid of the sorrow being so heavy that we’re afraid for our own self, ’cause this is hard. There are no words to describe what we’re going through,” Yolanda said. “All we know is we have each other,” she added. Nickayla, meanwhile, spoke about the legacy that Naya’s Glee character, Santana Lopez, has left on the world. “It was really awesome to hear the personal stories,” she said to GMA. “My sister, even though she was acting, was touching people’s real lives and helping them become who they really are and not being ashamed of that. It was just really amazing to see that she had that impact.”