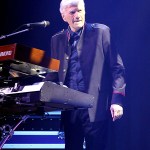 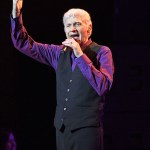 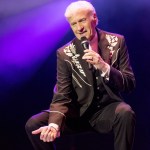 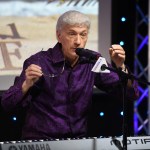 Before Dennis DeYoung releases his final album, the Styx co-founder shares how ’26 East Vol. 2’ scored a guitar solo from Rage Against The Machine’s Tom Morello, thanks to…Adam Sandler?

“What’s Tom Morello playing with Dennis Young for? Has he lost his mind?” asked Dennis DeYoung while speaking with HollywoodLife, as if even he can’t believe the Rage Against The Machine member joined him on “The Last Guitar Hero,” one of the twelve stunning tracks that make up 26 East, Vol. 2. Morello is the only featured guest on the album – which arrived on June 11 – and this collaboration wouldn’t be possible if not for the man behind 8 Crazy Nights. “I met [Tom] at an Adam Sandler shindig about four years ago, it was Christmas or Hanukkah,” said Dennis. “I sang, and then my guitar player, August, said to Tom, ‘You want to meet Dennis DeYoung?’ ‘Yeah! Okay.’ ”

It turns out that Tom wasn’t polite – he was actually a fan of Dennis and the band he co-founded, STYX. “He came to see the [Paradise Theater tour] show and [Kilroy Was Here] show,” Dennis tells HollywoodLife, referencing the shows where he and his touring band recreated those iconic albums (Dennis and STYX parted ways in 1999) and apparently, Tom was one of the many enthralled fans witnessing Dennis bring these classic rock staples to life. “He was a fan,” Dennis said of Tom. “He started out being a heavy metal fan, but then like he said, ‘my tastes expanded.’ That included us. And so I said, ‘Wow, the great Houdini is a fan.’ So, when it was time to get a solo for [“The Last Guitar Hero”] –which was actually written three years ago by Jim Peterik and me — I said, ‘well, I’ll call Tom.’ ”

“He may be the last guitar hero,” Dennis makes sure to emphasizes during the interview. “He’s the last guy to really do something unique on guitar.” DeYoung sent over the song to Tom, who said he loved the song and would be happy to be a part of it (“ ‘I’m in,” says Dennis, remembering Tom’s reply.) “That’s it. He played it, sent it to me during the pandemic. And I thought, by six seconds into the solo, you know who it is.”

Dennis is right. Six seconds into the solo, and it’s evident that it’s the Rage guitarist playing. Some naysayers might expect Tom’s style to stick out like a sore thumb, but it defies expectations to meld in seamlessly to complement Dennis’s songcraft. It’s one of many successes over both installments 26 East. The two-volume set concludes one aspect of Dennis’s lengthy and remarkable career, for these are his final studio albums. He has gone out – one would expect of the voice behind “Come Sail Away,” “Mr. Roboto,” and more – on a high note.

26 East, in particular, Vol. 2, sees Dennis stand triumphant. He’s one-part conductor, having ushered in a symphonic tour (de force) through his five-decade career — and one-part ringmaster, directing the audience to witness sights of wonder and amazement as he touches upon themes that have been prevalent throughout his entire body of work. There is the defense of the common man (“Last Guitar Hero”), a celebration of the undeniable power of love (“Made For Each Other”), and the search for greater meaning to life, as captured in Dennis’s favorite song on Vol. 2, “Your Saving Grace.”

“It just reduces me because I think it’s the question. There’s only one question: why? Why? There’s only one. Why this? Why are we here? Why? And in ‘Your Saving Grace,’ it’s a way of expressing the desire and the need for all of us to be saved by something greater than ourselves,” says Dennis. “We know, as human beings, our foibles and our shortcomings, and it’s the desire, which is what all religion is based on, to connect with an infinite power that can straighten out the whole mess. How did these parts go together? And when I hear it, it has such a spiritual yearning to be saved. So that’s the one, and I sang the shit out of it. And there you go.”

Only one other guest joins Dennis on the 26 East project. When speaking about the other voice who joined Dennis’s grand finale, DeYoung paused and pressed a curled finger against his lip. After a heartbeat of reflection, he remarked in wonder at how “a kid from Roseland in his basement with an accordion ends up singing a song with the son of John Lennon.” The kid with the according is, of course, Dennis, and the basement is his Chicago home that 26 East is named after. The son of the late Beatle is Julian Lennon, who joined Dennis on “The Good Old Days,” the penultimate track on Vol. 1.

“Julian– he sounded like his dad,” said Dennis, who shared how this dream collaboration came to be. “I [knew] he hadn’t done anything in six years, musically, when I sent [the song[ to him, and so he said yes. And I said, ‘Okay, he must like it.’ So we met one day. We were together for about five hours, maybe six total. That was it. I was in the studio with him, and he did great. And I love the song. I had a version where he sang the first verse by himself without the harmony. I sing the second verse by myself. I toyed with that. And then ultimately I thought, ‘Harmony. The world needs harmony, two guys singing together.’ ”

“I believed that, in my own arrogant way, that I could bring out the best of him,” said Dennis. Julian’s debut album, Valotte, came out in October 1984, two months after Dennis released his debut solo LP, Desert Moon. “So I was well aware and bought [Valotte]. I said, ‘Hey, this kid’s got talent.’ ” Nearly thirty years later, Dennis produced a song alongside Julian, and he couldn’t be happier with the results. “I said, ‘Hey Jules, I think I made you proud and myself to be involved in that project.’ So I love it. That’s my favorite song on Vol. 1.

Picking up where Vol. 1 ended, Vol. 2 kicks off with “Hello Goodbye,” a song that shares more than just a name with a Beatles song. It’s a celebration of the Fab Four, particularly the impact that they had on Dennis. After seeing The Beatles on The Ed Sullivan Show, “my life was changed,” says DeYoung. “The only thing that monumental that’s happened in your lifetime has been the fucking pandemic — seriously.”

“You know how many millions of people saw that and went– ” he says, aping the shock and stuttering of the millions that tuned in. “It happened. It was a social phenomenon that I don’t know is repeatable, and I was swept away.” This adulation is evident in “Hello, Goodbye,” a song he says is “about the fans, me, the fan, who said, ‘Look at that. That’s it.’ I saw them, and that’s what I wanted to do.”

“I’m just a kid with an accordion who was Beatle dreaming,” he says proudly in the interview. He also revealed that “Hello, Goodbye” was meant to start 26 East, but after deciding that the project would be split into two parts, it was deemed to kick off the second installment.

Before Vol. 2 closes, the album runs through, fittingly, a mini-concept album. “So I’m telling people what I think I’ve learned about myself. ‘St. Quarantine,’ ‘Little Did We Know,’ ‘Always Time,’ and ‘Isle of Misanthrope,’ those were the songs that were written to fill out this album during the pandemic. All the others were written two and a half years earlier.”

“So those four songs… ‘Quarantine,’ it’s kind of like a song I wrote called ‘Christopher, Mr. Christopher,’ ” said Dennis, referencing STYX’s album, Man of Miracles. The song “was about a nun who had made St. Christopher her patron saint and shared all her dreams, her fears with this saint, all her secrets, all her frailties. And then the Catholics said, ‘It’s not a saint. St. Christopher, he’s just Chris now,’ ” said Dennis with a smile. “ Hey Chris, get off my dashboard of my car.’ You see what I mean?”

“It’s the idea of religion, faith, belief in an ideology, a dogma, whatever it is. How does it affect people? What groups do they cling to? So in ‘St. Quarantine,’ I make him a saint,” says DeYoung. The song personifies the pandemic lockdown into a new religious figure. “We’re praying to him because we want out of this thing, and we’re all sweet and nice telling him how much he means to us. But by the middle of the song, the music changes because we realized he ain’t answering the phone. So the music changes. People go, ‘Hey, Q. For Q. This one’s for Q.’ ”

Dennis’s connection between the fear and uncertainty of a global pandemic – which resulted in toilet paper shortages and medical misinformation being spread faster than the disease —  and the QAnon conspiracy is a clever juxtaposition. “St. Quarantine” shows people searching for salvation, and when they don’t get what they want (or don’t like what they get), how they move on to the next messiah.

However, don’t be quick to place Dennis on one or another side of the aisle. “CNN, MSNBC, and Fox right now, I want to pass legislation that says, ‘They can’t use the word ‘news,’ ” he said. “They got to stay at least ‘opinion, some news,’ okay because they’re just arms of political parties. That’s dangerous to us as a country. We can see how dangerous. So Little Did We Know is my theory that ‘breaking news, this just in,’ nobody knows nothing. Has the pandemic not proved it conclusively? We don’t know anything.”

That sense of humility and humanity is what ends 26 East, Vol. 2. “So if you think your life is complete confusion / Cause your neighbors got it made / Just remember please, please it’s a grand illusion,” he sings on “The Grand Finale,” the album closer and coda on his studio career. “And deep inside, we’re all the same / We’re all the same.”

“I have really, since 1977, tried to tell the audience, in all honesty, we’re an illusion that we create to sell records, concerts, make you happy, entertain you,” said Dennis. “So I think, yeah, authenticity is what I’ve striven for, but don’t forget I belonged to a rock-and-roll band, and we all had to do this. We all had to be cool, whatever the hell that means. Because all I do is I find melodies as a writer, I stick notes on them, make up words, and then I tell you about myself and my life, hoping that you, the listener, will find yourself in my story. That’s all I do.”

And on 26 East, that kid from Rosemont, with an accordion in his hand and Beatles dreams in his head, writes an ending fitting of his magnificent career. Happily Ever After. The End.