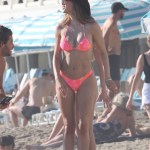 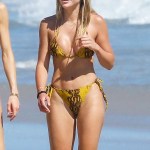 Hailey Baldwin took to Instagram to share gorgeous pics of herself rocking various stylish bikinis while enjoying the summer sun during fun adventures.

It looks like Hailey Baldwin‘s summer is off to a great start! The model posted several new photos of herself from a recent getaway she took with husband Justin Bieber, 27, and their friends Kelia and Joe Termini and she looks fantastic in every single one of them. One pic shows her flaunting a neon yellow and pink bikini while laying back and relaxing on a float in a pool while another shows her standing in the ocean in a royal blue bikini.

A third pic shows her sitting on a floor while showing off a neon yellow two-piece swimsuit and participating in what looks like a poster board drawing project. She topped the bikini pics off with a final one that showed her laying on the grass outside while donning a black and white zebra striped bikini under a multi-colored long-sleeved sweater. She added a dark green hat and sunglasses to the look, proving she’s a true fashionista.

In addition to the bikini pics, Hailey posed for snapshots that featured her sitting outside with Kelia while eating food out of a plastic container and standing in what appears to be a department store with Kelia’s adorable baby son strapped to her chest. There was also a close-up selfie of the two besties smiling while Hailey held a cup of a drink.

Fans were quick to compliment Hailey’s photos once she shared them. “gorgeous,” one follower wrote while another called her and Kelia “island girls.” A third called her “too cute” and many more left heart-eyed emojis to signify their love of the posts.

Before Hailey wowed her fans with her most recent pics, she did the same with pics of her and Justin posing with Jennifer Aniston, Courteney Cox, Matt LeBlanc, Lisa Kudrow, and David Schwimmer at the recent Friends reunion. The lovebirds had a chance to be on the set of the popular special (Justin also appeared in the fashion show!) and even sat on the couch in the Central Perk cafe, a focal location for the stars’ characters on the show.  “not.over.this.,” Hailey wrote in the caption for the epic snapshots. “never.will.b.”