“While it was annoying to sit in a bathtub for over 3 hours without getting up or cleaning the gross ashy water from the cigarettes, I am most happy by how those shots turned out,” Cameron Boyer of Weathers says to HollywoodLife. The pruned toes and ash stains were clearly worth it because the band’s new visual, “Rehab,” is a captivating cinematic adventure. After the grindhouse-style logo leads to the opening shot of Cameron smoking in a bathtub, it’s evident that this will be wild – and not everyone is coming out of it in one piece.

“I had wanted to write a song on this topic as it was very timely for me,” Cameron shares over email with HollywoodLife. “Rehab” marks the third single from the band’s upcoming (and long-awaited) sophomore album, Pillows & Therapy. “Our first record [2018’s Kids In The Night]  dealt a lot with mental health and just laying the cards out on the table reflecting who we are as people and what we’ve gone through,” adds Boyer. “Pillows & Therapy is almost a direct sequel. It continues that theme to showcase how we’ve grown while expanding the scope to what it means to actually want to get better.”

Cameron shares more on what fans can expect when Pillows & Therapy arrives on Aug. 13 (click here for the pre-save.) He also tells HollywoodLife more about the making of “Rehab,” the band’s relationship with their debut single, “Happy Pills,” and more – including where he got that suit he wore while sitting three hours in that bathtub. 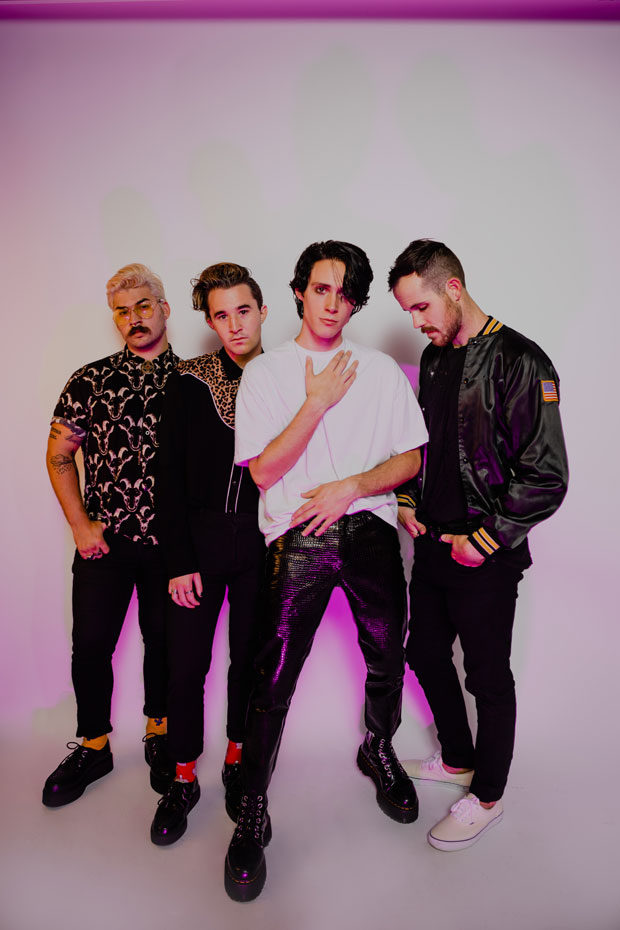 HollywoodLife: How did the concept for this video come together? Was it formed alongside the creation of the song?
Cameron Boyer: The concept for the video actually came about way after the creation of the song. When it came time to make the video, I just sat down and thought about what it felt like to be stuck in a toxic relationship. I also wanted to explore what it feels like when a toxic person attempts to return to their former role in your life and how it can sometimes feel somewhat addictive.

The song is about the addictive nature of a toxic relationship. What led the band to write a song about such a heavy subject?
Cameron Olsen (Guitar Player) and I are friends with some talented writers (Jacob Gago & Horace Gold) who had the framework of the song mostly together. I had wanted to write a song on this topic as it was very timely for me, and we added our parts on top of that framework.

Who made the suit Cameron wore in the bathtub? Asking for a friend.
Zara <3

There are some visually stunning scenes in this video? Is there a particular favorite – from both a performer standpoint and, in the case of Cameron, as a director?
While it was annoying to sit in a bathtub for over 3 hours without getting up or cleaning the gross ashy water from the cigarettes, I am most happy by how those shots turned out. It was almost identical to what I saw in my head. But the most fun one to shoot from a performer’s standpoint was the performance scene with the full band. Mainly because I had to act scared while performing a song until the end where I completely let loose. The dynamic of that was a fun challenge.

You’re releasing Pillows & Therapy in August. What’s the general vibe? Are you excited to finally put this project out in the world? Nervous to show how the band has grown since 2018’s Kids In The Night? Eager to play live shows again? D) All of the above?
The general vibe would be lots of fun new sounds backed up with heavy themes. I definitely believe the posers (what we call our fans) should listen to this alone while doing something fun. We are very excited to show our fans these songs. Some of them were actually written shortly after the Kids In The Night record was released, so it will be nice to finally share them with the world. So D- All of the above. Also- me not being nervous or worrying would be like saying pumpkin pie is not objectively not the best dessert.

How would you say Pillows & Therapy is different from Kids In The Night?
Other than sonically introducing new sounds song by song, we are, conceptually, wanting to push the boundaries. Our first record dealt a lot with mental health and just laying the cards out on the table reflecting who we are as people and what we’ve gone through. Pillows & Therapy is almost a direct sequel. It continues that theme to showcase how we’ve grown while expanding the scope to what it means to actually want to get better. I’ve felt for a long time that there is a relatively silent but dangerous theme sprouting throughout the mental health community. That theme being that it’s almost “cool” and “fun” to not be ok. And while it’s always ok to not be ok, I believe it’s dangerous to start thinking it’s “cool” to not be ok.

I feel like I’ve seen people almost WANT to not be ok as if it’s a clothing trend. And while I believe we should all accept who we are, including our state of mental health, I believe we should always WANT to get better and work on ourselves. And “getting better” doesn’t necessarily mean “getting cured,” but at least getting to a place where you can accept who you are and where you’re at so that you can learn to live comfortably and know what to do when the demons arise again.

It’s been five years since your debut single, “Happy Pills.” Looking back, what is your relationship with the song? Is it a close friend you like to bring out on stage every night? Or a photograph of a different time?
Our relationship with the song has changed a lot over time. It’s almost like that one partner you had that was perfect for you for where you were at the time. But then you both outgrew each other and decided that, while painful to accept, it would be best to part ways and move on. I would definitely say it’s more of a photograph of a different time. But a time we look back on fondly but are happy to have moved on from. I, personally, am in a much more “informed” place now. I know a lot more about myself and the music I wanna make. I know a lot more about what I want in life and what kind of people I want around me. That chapter is closed and I’m insanely happy to have moved on and taken on new challenges and sounds. If we were still making music like that, we probably wouldn’t be a band anymore.

Pillows & Therapy is set for August 13. Click here to pre-save.