Three months after accusing Marilyn Manson of physical and psychological abuse, Game of Thrones actress Esme Bianco is suing the singer for sexual assault, sexual battery, and/or violations of the Trafficking Victims Protection Reauthorization Act. Bianco, 38, claims in her lawsuit that Manson (real name Brian Warner) “used drugs, force, and threats of force to coerce sexual acts” from her on multiple occasions. She also accuses Manson of raping her “in or around May 2011,” according to the court filing obtained by HollywoodLife.

HollywoodLife has reached out to Manson’s rep for comment. Bianco met Manson in 2005 through his then-fiancée, Dita Von Teese. He “expressed interest” in casting Bianco in an upcoming film project. Though the project got delayed for several years, they still kept in touch. When Manson and Von Teese divorced in 2007, the filing claims that he then made “his first sexual overtures towards Ms. Bianco.” That allegedly included asking her for nude photographs on “multiple occasions.”

She details another incident in 2009, when Manson flew Bianco to Los Angeles under the pretense of filming a music video for his song “I Want to Kill You Like They Do in the Movies.” Instead, upon arrival, “Ms. Bianco found that there was no crew present and that she was expected to stay at Mr. Warner’s home rather than in the hotel that had been previously booked.” The court docs claim that Bianco was forced to wear lingerie and was “expected to be on-call 24/7.”

Because of this, Bianco claims she was “subjected to sleep deprivation” and was allegedly not provided food during her four days in Los Angeles, just drugs and alcohol. “In addition to these deprivations, Ms. Bianco was threatened and physically beaten by Mr. Warner. Mr. Warner repeatedly told Ms. Bianco that he would come to her room and rape her during the night. He threw tantrums where he would destroy camera equipment and throw objects around the room.”

Manson allegedly attempted to force Bianco to perform sexual acts on camera with another woman “who was present throughout the shoot.” Disturbingly, Bianco claims that Manson “locked Ms. Bianco in the bedroom, tied her to a prayer kneeler, and beat her with a whip that [he] said was utilized by the Nazis. He also electrocuted her.”

Later that year, Bianco and Manson started a consensual sexual relationship. She moved in with him in Los Angeles two years later, and he promised to help the British actress get a visa. She details in the court docs strange, violent behavior, including Manson allegedly chasing her around their home with an axe, cutting her “with a Nazi knife” during sex, and posting photos of the wounds online without her consent.

He allegedly raped her in May 2011. Bianco fled in June 2011 as Manson slept. When he discovered she had left, he allegedly threatened to have her visa revoked and said he would “punish” her. Bianco claims that she developed PTSD, depression, and panic attacks from the relationship, and that it caused her “career and mental health to suffer.”

Bianco said in a statement obtained by HollywoodLife: “For far too long my abuser has been left unchecked, enabled by money, fame and an industry that turned a blind eye. Despite the numerous brave women who have spoken out against Marilyn Manson, countless survivors remain silenced, and some of their voices will never be heard. My hope is that by raising mine I will help to stop Brian Warner from shattering any more lives and empower other victims to seek their own small measure of justice.” 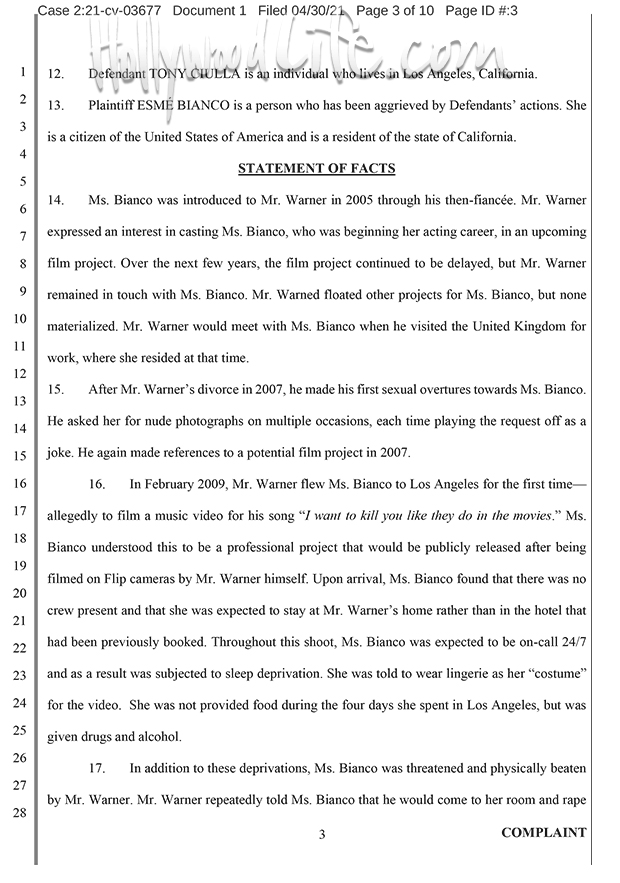 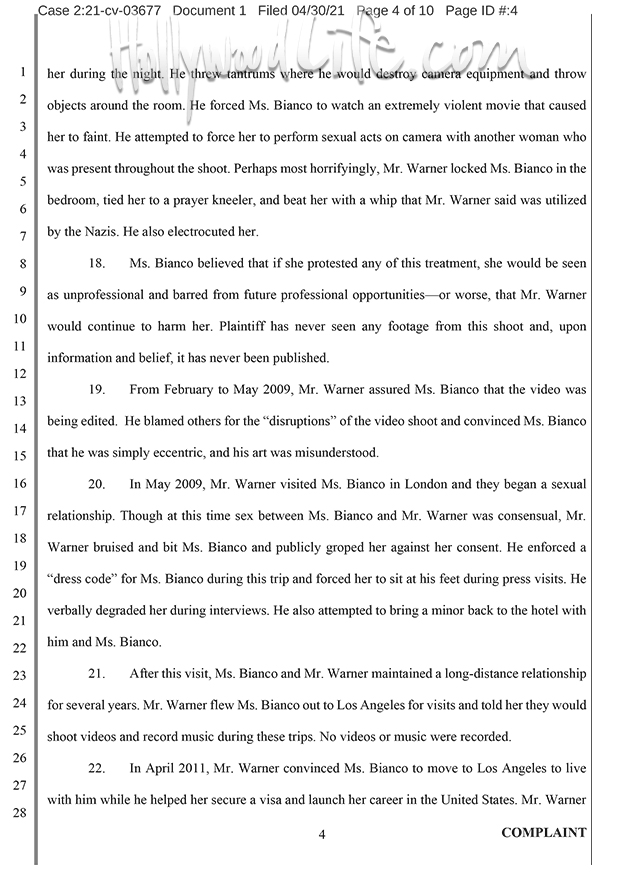 Bianco is one of several women who have accused Manson of sexual assault in 2021. Westworld star Evan Rachel Wood, who dated “The Dope Show” singer, accused him of “grooming” and “horrifically abusing her as a teenager. “I am done living in fear of retaliation, slander or blackmail,” she wrote on Instagram in January. “I am here to expose this dangerous man and call out the many industries that have enabled him before he ruins any more lives.”

Rose McGowan, who was engaged to Manson in the late ’90s, said that she stood by Wood and “other brave women who have come forward.” Manson was dropped by his label following Wood’s accusations, all which he denied in a February 1 statement, calling them a “horrible distortion of reality.”