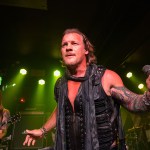 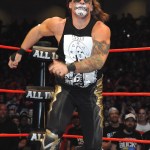 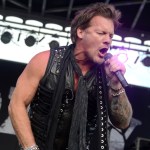 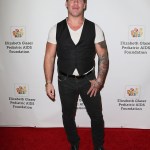 Chris Jericho battles Dax Harwood during tonight’s ‘AEW Dynamite,’ but Chris tells HL that he also has to keep an eye on the match’s ‘unpredictable’ special enforcer: Mike Tyson!

Mike Tyson will be ringside during tonight’s AEW Dynamite, and someone might end up getting knocked out. The “Baddest Man On The Planet” and boxing icon will be the “special enforcer” for the match between Chris Jericho and Dax Harwood. This battle will be another chapter in the ongoing war between Chris and his group, The Inner Circle, and Maxwell Jacob Friedman. MJF turned on Chris and the Inner Circle to form The Pinnacle with Harwood, Cash Wheeler, Shawn Spears, and Wardlow. There’s a lot of bad blood between these two factions, so some extra security was needed to ensure neither side interferes.

Enter Tyson. Will Tyson keep the peace? Will he stay impartial? The Talk Is Jericho host doesn’t know. “The thing we love about Tyson is that he is Tyson,” Chris says while talking EXCLUSIVELY with HollywoodLife. “[He] is very unpredictable. He is going to do what he wants to do, and that is kind of why people like seeing him.”

During the chat, Jericho shared with HollywoodLife why he thinks the recent celebrity matches featuring Shaquille O’Neal and Bad Bunny were successful (whereas past celeb matches were not.) He also shared why he put together The Complete List Of Jericho, a new book he calls “the definitive overview” of his 30-year career, and more.

HollywoodLife: You have a big match on tonight’s AEW Dynamite. You take on Dax Harwood and Mike Tyson is the special enforcer? He helped you out last week, but can he actually be trusted? The last time he was ever in this role was with Shawn Michaels and “Stone Cold” Steve Austin at WrestleMania 14, and he turned against who he was originally lined with.

Chris Jericho: Yeah, I don’t know. Because the thing we love about Tyson is that he is Tyson. He loves being Mike Tyson which means that he is very unpredictable. He is going to do what he wants to do, and that is kind of why people like seeing him.

There is always an ‘x-factor’ with Mike. When we found out that he was available for a couple of weeks, we wanted to put together a cool two-part story and last week was that first part, which leads to him being the ringside enforcer for Jericho versus Dax Harwood. And what is he going to do? I don’t know. Is he going to knock out Dax Harwood? Is he going to knock me out? Am I going to knock him out? That is the fun about it: we don’t really talk to him or coach him like another wrestler on the show because he is going to do what he wants to do regardless. And that is one of the reasons we love having him around.

Whatever happens with that match, I assume it will be added to a future update of your book, The Complete List of Jericho, which documents and highlights every match you have ever been involved with. You are clearly a smart guy, but where did you originally come up with the idea to actually document every single thing you have ever done in the ring?

Yeah, [this match] will be an appendix. (laughs)

When we were all starting out in wrestling school, we were allowed to ask questions to the trainer. He said, ‘that was kind of a dumb question because no one ever kept track of that sort of thing,’ and I thought it wasn’t a dumb question at all. If I want to know how many games Wayne Gretsky played in hockey, I can go to the library and look at a book that could always tell me. So I always thought throughout my career that I would keep track of every match that I ever had just because nobody else has ever done this, and I want to know.

And, I just got into the habit of it where I would finish the match, take my gear off, take a shower, have something to eat, and write and put down the match in the book, and carry on with my night. So here I am, 30 or so years later, and I have every single match that I have documented, which, once again, I don’t think anyone has that. So it really is a once-in-a-lifetime type of book for a guy who has had a 30-year career, [one] that could tell you every single match that he has had, with the date and who it was with. So it is really kind of a history book and combines that with all facts, figures and documentation and facts and top ten lists and memories. It is really the definitive overview of Chris Jericho and his entire 30-year career.

.@MikeTyson will be the Special Ringside Enforcer, TONIGHT on #AEWDynamite at 8pm on TNT when it is @DaxFTR w/@CashWheelerFTR vs. @IamJericho w/@sammyguevara in one of the BIGGEST matches EVER in AEW! All other members of #ThePinnacle & #InnerCircle are banned from ringside! pic.twitter.com/KPK2mxX0mB

With Mike Tyson joining the match, he might join it more than just the enforcer. We have recently seen with Bad Bunny and Shaq that the adding of a celebrity is now a good thing. Much different than Jay Leno versus Eric Bischoff, why do you think things have gotten so much better?

You [now] have guys that have a large amount of respect for pro wrestling. You can throw the Jay Leno name in there, and I will raise you a Karl Malone and a Dennis Rodman. Lawrence Taylor, way back in the day.

There are athletes and guys like Bad Bunny who have been lifelong fans of wrestling and really respect what we do and want to be involved. Those are the ones that always work the best. If you take a guy who doesn’t want to do the training and do the things to put on a good match, you will not get one. Then it becomes more of just a stunt casting, shall we say.

But someone for Shaq, he took it very seriously. He worked very hard to put on the match he did. The same thing with Bad Bunny — you can tell the training was there because what he did was very much like the match we had with Shaq. After the match, [Shaq] said, “I wanted to make you proud, brother!”

I don’t think [these recent celebrities] want to come in there and embarrass themselves or, more importantly, embarrass the sport with all the respect that they have for it. It’s the same thing with Mike Tyson. He loves being around the business and respects the business, and he has since he has been a kid. All he wants to do is his best. And at the end of the day, he is Mike Tyson, so there is always that element of what he is going to do. But if he didn’t want to be there for the right reasons, he wouldn’t be there.

Speaking of celebrities getting into the ring, is there any one of your metal peers you want to tango with?

I don’t think of it that way. People ask me that, thinking it is a fun question, but to me, it is like, “if you want to do it, you have to put the time and effort and the right angle and storyline.”

To me, it is like, “Who in the metal world would you put in a wrestling match that would be believable?”  The Bad Bunny thing was a little different, and I suppose you could find somebody like Zakk Wylde who could probably train and actually do it. But, you have to be an athlete first and foremost, and that is why Shaq was so good or Tyson being involved [is so good] — because of the intensity that he has because he knows what it is like to be in a fight — so when he is in the ring, you are not thinking that this is some kind of “haha” type thing.

.@MikeTyson will be the Special Ringside Enforcer, TONIGHT on #AEWDynamite at 8/7C on TNT, when it's @DaxFTR w/ @CashWheelerFTR vs. @IamJericho w/ @sammyguevara in one of the BIGGEST matches EVER in AEW! All other members of #ThePinnacle & #InnerCircle are banned from ringside! pic.twitter.com/jwfEl0CpFd

So, if the story is right, and the guy wants to put the right time in, then once again –  what we did with Shaq and what WWE did with Bad Bunny are perfect examples of the right story and the right guy who is willing to put in the time to do well and here is one last thing on it.

When I did Dancing with The Stars, the guys that didn’t respect what they were doing or out in the time to rehearse were out quickly. I realized if you don’t rehearse six or seven hours a day, every single day, you are not going to last long, and that is why I did so well. I went into that world with the respect and desire that you needed to succeed, and that is what you have to do in wrestling as well.