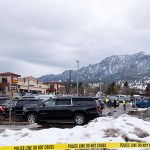 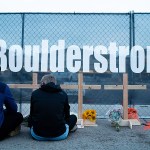 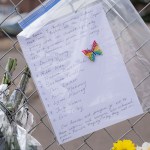 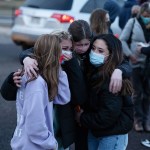 When I first saw the news that a gunman had shot up the King Soopers supermarket my heart sunk. But I couldn’t have imagined that my lovely former Photo Director, Lynn Murray, would be one of the victims.

Here’s the truth that you, I and all of us must realize: any of us today could be gunned down anywhere while going out about our daily lives. Any of us, or one of those we most love — a life partner, a child, a parent, a close friend, a co-worker or a neighbor — could be the victim.

We could be at work, at a place of worship, in a school or at a college, in a movie theater, on public transportation, at a mall, a nightclub, a concert and now at a grocery store, when it happens without warning.

That’s where Lynn Murray was — at a grocery store. Lynn, 62, a warm, lively, lovely wife and mom of 2 was at the grocery store filling an order for Instacart when she was murdered, along with 9 other innocent victims. All were slaughtered allegedly with a Ruger AR-556, described as a lightweight semi-automatic rifle.

I didn’t learn until late Tuesday evening, March 23, that Lynn, the highly talented Photo Director I had worked with for about 10 years, had been robbed of her life in this new massacre. Lynn, who had the most beautiful smile and laugh. Lynn, who helped to make the launch of Marie Claire magazine in the U.S, so successful. I was lucky to have hired Lynn as our Photo Director when I was the Editor-in-Chief of the magazine about to arrive in America, Marie Claire. She was so terrific at her profession that when I moved over to Cosmopolitan magazine as Editor, it was a no-brainer to ask her to join me there. And then when I took over at Glamour magazine as Editor-in-Chief, of course, Lynn had to come along.

Lynn was unstoppable in the high intensity world of top fashion magazines. She spent her days on the phone booking world renowned photographers for our cover, fashion, beauty and feature shoots. They, and their demanding agents, all loved Lynn.

She negotiated for the biggest names in the modeling world — the super models — for our covers and top fashion photography shoots. She helped coordinate photoshoots with the celebrities that also appeared on our covers and inside the pages of our magazines.

None of this was easy. But Lynn was determined, charming and persuasive. We could never have had such successful covers with Mariah Carey, Britney Spears, Jennifer Aniston, Elle Macpherson, Halle Berry and more, without Lynn’s work.

I remember that for the launch issue of Marie Claire, we were desperate for the “perfect” first cover photo. Nothing seemed just right. Lynn to the rescue. Looking through the stills of a fabulous photo shoot of “super” Claudia Schiffer shot on the streets of Paris by legendary photographer Patrick Demarchelier; there she spotted it: a gorgeous, emotionally-connecting portrait of Claudia gazing out a us in her claret-colored Chanel suit.

It became our best-selling premiere cover, thanks to Lynn.

But Lynn wasn’t just a wonderful Photo Director; she was also a loving, dedicated mom, in more ways than one. She once mothered a stray cat that wandered through a window from the rooftop outside her NYC apartment. The cat was so happy to be under Lynn’s care, especially after she gave birth to a litter of kittens in Lynn’s bathtub.

Lynn made sure to find homes for all the adorable little kittens, including the runt, who we adopted. Pebble became an important and beloved member of our family.

Lynn couldn’t have been more excited about becoming a mother when she became pregnant with her daughter, Olivia, now 24, and then her son, Pierce, now, 22. She and her loving husband, John Mackenzie, dedicated themselves to their children, moving to Long Island and creating a beautiful, warm, airy and completely kid-friendly home.

My husband and I got the chance to stay with them and enjoy their family when we were all invited one summer to a celebrity-packed all-white party in The Hamptons, where we all met Diddy for the first time. That was Lynn – total professional, devoted mom, but totally comfortable mingling with the Hollywood-on-Hamptons crowd.

Now, the world, but especially Lynn’s — her husband and children — are deprived of the heart of their family, because a 21 year-old could just go out and buy a lethal weapon.

“She was an amazing woman, probably the kindest person I’ve ever known”, her grieving husband John told the New York Times. “The most undeserving person to be shot down I can think of has to be my mother,” her mourning daughter Olivia shared.

I can second that.

No one else deserves to be gunned down by an angry person who can buy as many military weapons as they want, and also carry them anywhere. Thanks to an NRA lawsuit, a Colorado judge had just overturned a local Boulder city ordinance banning the possession of assault weapons and large-capacity magazines. The NRA celebrated this court ruling on social media. Five days later, Lynn was murdered.

Now, she is one of the 14,000 Americans who have been murdered by guns every year. In America, 39,000 have died by gun violence in recent years.

It doesn’t have to be this way. We can have sensible gun control laws that require a thorough background check before every gun purchase, and that prevent people with a history of domestic violence or mental illness from purchasing guns.

It’s too late for Lynn, who should have been able to live a long, full life. This can’t go on.

I mourn you, Lynn, and my heart goes out to John, Olivia and Pierce.

Ahmad Al Aliwi Alissa, a 21 year-old taken into custody at King Soopers, has been charged with 10 counts of first-degree murder and one charge of attempted murder.