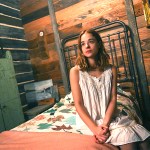 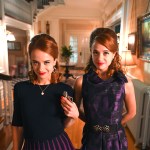 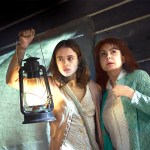 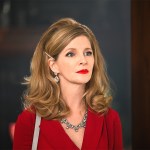 HL got the EXCLUSIVE scoop from Raechelle Banno about starring alongside her twin sister Karina in ‘Ruby’ and more.

Lifetime is kicking off its epic V.C. Andrews movie event series with Ruby on March 20. Raechelle Banno stars as Ruby Landry, who is forced to flee to New Orleans from the Louisiana bayou after dark family secrets reveal themselves and her beloved Grandmère dies. In New Orleans, Ruby crosses paths with her twin sister Giselle, who is actually played by Raechelle’s real-life twin, Karina Banno. Raechelle explained to HollywoodLife EXCLUSIVELY how her sister ended up as her co-star.

“We have separate representation, but the audition came through and it was kind of like, do you both want to go for it? And we were like, why not?” Raechelle told HollywoodLife. “We love working with each other, and it was a really cool experience. It was a strange way to audition because normally you only have one person on screen, but we were both on the audition together. We figured it out, and it was really fun to put something down together, and then it all just fell into place really quickly. It seemed meant to be.”

Raechelle admitted that being able to work with her sister was an “absolute blessing.” The scene where Ruby and Giselle meet was actually shot on the first day of filming. “I really did get swept away with like, wow, look at her go. I’m just so proud of her,” Raechelle gushed. “Karina’s incredible in these films. She really steals the show, and I just had so much pride in working opposite her. So many people have had the pleasure of working opposite Karina. She’s so hardworking and so dedicated and electric. I had the pleasure of being opposite that. I only have had that a few times in my life, so to do it for this… It has a very special place in my heart.”

Raechelle also revealed her connection to V.C. Andrews started when she auditioned for the 2014 film Petals on the Wind. “I was aware of My Sweet Audrina, but I wasn’t familiar with Ruby.” When she got the role of Ruby, Raechelle admitted she “searched online and found copies of the books, real ’90s versions of them, and just yet tore through them. It was really cool.”

Playing Ruby has been a “special project” in more ways than one for Raechelle. “This has been a really special project for me in the sense that it provided me with a new opportunity in how to prepare because this source material is all told from Ruby’s perspective,” the actress explained. “I was able to read the books and really understand not just what she did but how she felt about people, even if she didn’t say it to people. I could then layer that into my preparation, and I’ve never experienced that before. I went into it with a real solid understanding of Ruby’s perspective on her experiences, and those people she crossed in the story. It was my first time not having to build in an inner monologue. It was kind of handed to me, which is rare.”

As for whether or not Lifetime’s Landry movies stay true to the source material, Raechelle revealed that fans will be pleased. “I think in certain circumstances I’m really proud where we slightly made a left turn here and there,” Raechelle said. “We’re quite sex-positive in these films, as opposed to I think Ruby in the books quite doubts her sexuality. I thought that it was quite positive that she is enjoying exploring her sexuality, even if it is just romance or friendship with the opposite sex or anything like that. So [it was] tiny little things, but that’s more inside rather than outside. Otherwise, story plot points, we stay really true to it.” Ruby premieres March 20 at 8 p.m. on Lifetime.