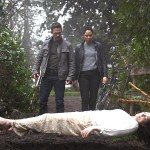 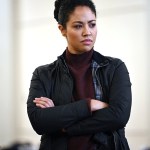 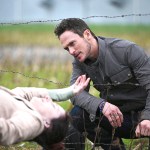 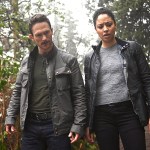 The world of ‘Debris’ just starting to unfold. HL spoke EXCLUSIVELY with Jonathan Tucker about Bryan’s traumatic past, the secret he’s keeping from Finola, and answers about the show’s big mysteries.

The first episode of the NBC series Debris left fans with many exciting questions. Bryan and Finola’s work investigating mysterious alien debris and its effects is just beginning. As they dig for more answers, Bryan and Finola’s past and motives will continue to reveal themselves.

HollywoodLife spoke EXCLUSIVELY with star Jonathan Tucker about where the show is going after the first episode. He reveals how Bryan keeping the secret that Finola’s father is still alive will impact their relationship. Jonathan calls it the “driving force of the season.” Read our full Q&A below:

Debris comes from the mind of J.H. Wyman, who we all know created Fringe. When it comes to shows like Fringe and Debris, do you find yourself asking questions about the mythology of the show, or are you just along for the ride?
Jonathan Tucker: It’s the anthem of life: you’ve got to go for the ride. You want as much information as you can, but you’ve got to get on the roller coaster and put your hands up and enjoy the thrill of the journey. The initial conversations I had with Joel it was clear that he has spent a lot of time building out the mythology and truly knowing what the entire story is and where it’s going to go. He says he knows the last shot of the five seasons and the last line of the first season. So I got to get a lot of that information, but he’s still full of surprises.

When watching the pilot, Debris is most certainly a sci-fi show, but the first episode really examined the weight of grief. The debris was a metaphor for grief. As the show continues, will Debris continue to examine those deeper human emotions while exploring this alien debris?
<Jonathan Tucker: Absolutely. I think one of the things in terms of everything being a metaphor is that everything that you encounter in your life is not just an external event. It refocuses on the people who are experiencing those challenges or rites of passages or opportunities and gratification. Oftentimes, you don’t think about the fact that when you graduated college, while it was totally an event for you and about you celebrating all the accomplishments over the past four years and maybe even longer, your parents are sitting there going, “I can’t believe my daughter graduated from college. Where am I in my life? Everything that I wanted to have happened did happen, and she turned out the way we had hoped.” When something happens in the world, you think about your personal experience as well. I think Debris is very much like a mirror in that sense, where the people who discover it, hold it up, and they see themselves in it, or different parts of themselves reflected in it. We explore that week to week.

There seems to be just an array of possibilities with this debris, but the show is grounded in its humanity. Has it been fun for you to play with that juxtaposition of something so otherworldly with aspects of the show that are so grounded?
Jonathan Tucker: Absolutely. I think that’s one of the things that makes Westworld compelling as well. It’s this idea that you can go into a world and experience it with all of the tools that you have right now, here on Earth, in the natural world as we know it. That’s the case with Debris. It’s not out of the realm of possibility that things are falling from the galaxies and happened to land on Earth. We have this with comets and asteroids. We have now started to see that some of the space junk we have thrown out there can fall back into the atmosphere as well. If we start playing with the numbers of suns and galaxies and the possibility that we’re not the only life out there, it’s not crazy to think something like this could happen.

The first episode introduced us to Bryan and Finola. We see that Bryan is haunted by his own grief and past trauma. What can you say about how those layers will reveal themselves as the season continues?
Jonathan Tucker: I think everybody has a story to tell. People are a lot less boring than they think they are. Everybody has something to offer, and this is a character that is hiding a lot of trauma and masking it often with humor or a sense of almost indifference to things. But ultimately, he’ll end up discovering partly in the first episode that vulnerability and empathy, some of the character traits that his partner for Finola has right on her sleeve, are powerful tools. Both of these people are going to have to really trust one another and the sort of deficits that they have in order to succeed in their missions.

Speaking of trust, there is a secret that Bryan is keeping from Finola. Her father is actually alive. How will that secret impact and influence his relationship with her in the episodes to come?
Jonathan Tucker: This is the big driving force of the first season, which is very much an origin story about a young woman finding her father and a man saying goodbye to his father in some respects. This is one of the big engines of our first season. I think part of what we explore is: who are you with your parents? And who are you without them? I remember somebody telling me that you’re not ever really a man until you lose your father. I think it’s a very hard truth in our lives that you don’t really stand on your own two feet, in the most spiritual sense, until it’s just you.

In the beginning, Bryan admits that he doesn’t think Finola is up for this job. While Finola has some reasons not to trust Bryan completely, do you think he inherently trusts her?
Jonathan Tucker: No, I think there’s mistrust on both sides, and they have to work together. They’re trying to figure it out. I think he has a little bit more experience in this than she does, but he doesn’t have all the tools required to handle what they end up facing as the season continues, and he realizes and recognizes that pretty quickly.

When it comes to a show like this, there are so many questions. How many answers will we get in this first season?
Jonathan Tucker: Quite a bit. I think one of the things that fans are concerned about is: will they give us enough information to satisfy us? Will the story engine be big enough to last over multiple seasons? And then I guess the final one is: will this be canceled by NBC? These are the big questions out there from audience members that take the time to invest in these stories and the characters. I totally appreciate that and understand that. I am dead confident on the first three and have a high degree of confidence that NBC will support the show. We know where we are, we know where we’re going, we know how far we’re capable of going, and we think we’ve got enough gasoline in the tank to do all of that.

What can you tease about what Bryan and Finola will be exploring in these next couple of episodes?
Jonathan Tucker:  The fun stuff is like teleporting and sort of time jumping, people aging in reverse, mental telepathy, and weather manipulation. We’ve got a whole bunch of those things. The debris really can kind of do anything, and it’s not really good or bad. It just ends up being used by the people that discover it and manifesting in some of their emotions or hopes and help them solve challenges. And then over that first season, it’s about somebody’s finding their father and somebody saying goodbye and trying to do battle with some of the nefarious players on the world stage. We’re all trying to figure out: can you land something on an asteroid and extract all the valuable minerals that are there? There’s a lot of money to be made here and a lot of power to grab, so that becomes a bigger part of the story over the course of the first season.