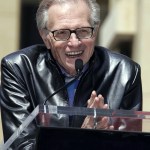 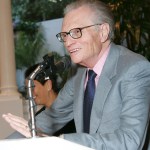 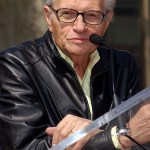 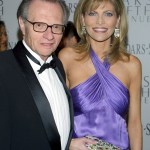 Craig Ferguson, Wendy Williams and more stars paid tribute to Larry King, who sadly passed away on Jan. 23. He was 87 years old.

TV legend Larry King has passed away at 87 years old — and tributes to the the former CNN host have been pouring in on social media. The sad news comes after Larry was hospitalized with the deadly COVID-19 virus earlier this month. The View‘s Meghan McCain shared a series of sweet throwback posts on her Instagram account, dubbing Larry a “real friend” she could count on.

“There are ‘friends’ in this industry and then there are real friends for whom I can count on one hand. Larry was one of those people,” she penned in her beautifully written tribute. “From the beginning of my career when I first appeared on his show when I was 23 and no one took me seriously, he gave me a platform, opportunities, guidance, support and always treated me with the upmost respect. He did so throughout my entire career,” she added, noting she went on his show a number of times and even got to fill in for him.

“He gave the best career advice…He was old school – one of the best parts of going on his show was that it was an entire experience – he would entertain us in the green room, have food and drinks and hang out long after taping was finished and share hilarious, colorful stories from his life in a way only men of his generation can,” she reflected. “You are an institution, a broadcast legend, will never be replaced and truly missed. TV is less interesting without you,” she also wrote.

Supermodel Cindy Crawford remembered Larry with a clip of her appearance on his show from way back in 1996! {Celebrating the life of @larrykingnow – and all the conversations he had. A loss of a legend #restinpeace,” she wrote, including a heart emoji. Cindy also included a photo of the pair in more recent years at a formal event.

A fellow legend in her own right, singer Celine Dion took to social media with her memories of the CNN host. “I’m sad to learn about Larry King’s passing. He was such a kind gentleman, and he made all of us feel as though we were speaking with a lifelong friend,” the Canadian born star shared, including a photo of the duo smiling. “There will never be anyone like him, and he will be missed by many. My sincerest condolences to his family & friends. Celine xx…,” she concluded.

I’m sad to learn about Larry King’s passing.He was such a kind gentleman, and he made all of us feel as though we were speaking with a lifelong friend.There will never be anyone like him, and he will be missed by many. My sincerest condolences to his family & friends. Celine xx… pic.twitter.com/NBw0hpCDoj

Lisa Vanderpump shared a candid throwback photo of herself, late dog Giggy and Larry. “Aaagh, he was iconic and I remember how gracious he was in this interview …#RIPLarryKing,” the Real Housewives of Beverly Hills alum captioned her Instagram post. Fellow Brit Elton John, who made several appearances on Larry King Live over the years, shared a screengrab from a past interview. “Always a gentleman. You treated your guests so elegantly. It was a pleasure and an honour to do your show,” the “Candle In The Wind” singer wrote.

Katie Couric, who once hilariously shared a story about going on a date with Larry King back in 1987, remembered some of his career accomplishments. “Larry King – the longtime @cnn host and television icon has died at the age of 87. He hosted Larry King Live on CNN for over 25 years and taped over 6,000 episodes,” she posted, including a photo of him. Katie noted that he’s suffered a number of health problems over the years — including heart attacks — inspiring him to start the Larry King Cardiac Foundation. “Sending love to his family, friends, and colleagues. Rest In Peace,” she concluded.

Wendy Williams posted an iconic photo of Larry behind his CNN desk, wearing his signature tie and suspenders. “Sad news this morning. TV broadcasting legend Larry King has passed away. He was 87. #RIP,” the fellow broadcaster posted. Of note, Larry King Live was CNN’s most-watched and longest running series, airing from 1985 until 2010.

Craig Ferguson remembered Larry with his own tribute, making a sweet joke about a word the New York City native taught him. “Just heard the awful news about Larry King. He taught me so much. He was a true mensch. He probably even taught me that word,” the former Late Late Show with Craig Ferguson host tweeted. “So long pal, thanks for all the laughs. Say hi to Rickles,” he wrote, referencing the late Don Rickles.

Just heard the awful news about Larry King. He taught me so much. He was a true mensch. He probably even taught me that word.
So long pal, thanks for all the laughs. Say hi to Rickles. #RIPLarryKing

RIP Larry King!!!! I loved the easy breezy format of his CNN show, and his amazing voice.

Meanwhile Ryan shared that he “lost a dear friend and mentor. Truly an American treasure. Rest in peace, Larry King.” Our thoughts and prayers go out to the King family.